With Larry David set to host Saturday Night Live this weekend, viewers are all but guaranteed to see a sketch — maybe even two or three of ’em — featuring his beloved take on Democratic presidential candidate Bernie Sanders.

While that thought probably makes you happier than Rosie O’Donnell fantasizing about a Donald Trump concession speech, allow me for a moment to sound as crusty and cantankerous as David’s version of the Vermont senator.

Trust me, I say this as a fan of David’s Sanders, Tina Fey’s Sarah Palin and Darrell Hammond’s Trump. (Yes, yes… Hammond is employed as SNL‘s announcer, but he’s not a current member of the core cast… so he fits into this argument, too. As does Will Ferrell’s recently resurrected George W. Bush.)

Think about it: If Palin makes another bombshell speech or Sanders scores a key win (or loss) on the primary trail — and Fey or David are too busy to moonlight in Studio 8H — then SNL has to take a pass on satirizing the moment.

Well, either that, or they’re stuck grabbing one of their 12 repertory players or four featured players to pinch-hit in roles that are too important to not be practiced, honed and perfected over the course of a season(s). For example, what chance does Cecily Strong have to develop her strong own take on Palin if Fey’s brilliant skewering is intermittently dangled in front of us? 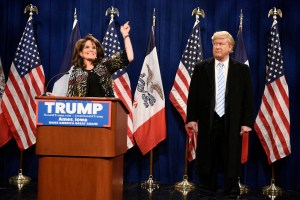 That might sound blasphemous — Fey’s Palin is one for the ages, after all — but in a similar vein, it’s not a condemnation of Amy Poehler’s hilarious Hillary Clinton if you’ve also come around to enjoying Kate McKinnon’s robotically ambitious rendition.

That, of course, raises a larger question: With 16 full-time comics on staff, is there really no one qualified or interested in taking over as Trump, Sanders and Palin? (To be fair, before Hammond stepped in, Taran Killam’s Trump wasn’t half-bad.) And isn’t it more than a little troubling that it takes outside blood to give SNL‘s political satire a pulse nowadays?

To that end, another head-scratcher: Whatever happened to Jay Pharoah’s Barack Obama (and the brutally underused Sasheer Zamata as Michelle)?

Last I checked, POTUS and FLOTUS were still pretty big newsmakers — and yet, in Season 41, SNL has shown more interest in Kyle Mooney video jams (ugh) and stomach-turning statutory rape sketches (double ugh) than looking for laughs in the Oval Office. Pharoah, in fact, hasn’t played Obama once over the course of the season’s 11 episodes.

Maybe that’s a problem that starts in the writers’ room. Maybe Lorne Michaels needs to poach a politically minded staffer or two from The Daily Show or Inside Amy Schumer or the now defunct Key & Peele.

In any event, let’s hope SNL bottles a little of Larry David’s mad-as-hell socialist energy this weekend, and finds a way to tap into it for the latter half of the season. That’s change I think we can all believe in.

Your turn. Does SNL have a political problem in Season 41? Do you find their outsourcing of Palin and Sanders — and the absence of Obama — peculiar? Sound off below!