Now that she’s facing more enemies than ever, might Supergirl want to enlist James Olsen as her official sidekick?

After all, it wasn’t exactly Kara’s icy breath and heat vision that neutralized Monday’s Villain of the Week, Bizarro. It was a heartfelt speech from Mehcad Brooks’ almost-too-nice alter ego that caused Supergirl’s doppelgänger to finally soften. As it turns out, all it really takes to face down a National City threat is a few genuine words about being a good person. (Well, that and some reverse-engineered Kryptonite, but the point still stands.)

On Monday’s installment of the CBS drama, Kara comes face-to-face with Maxwell Lord’s latest creation: a once-comatose Jane Doe whose body and mind were messed with until she came back to life — the equivalent of a Frankenstein’s monster programmed to hate (and, ideally, kill) Supergirl. 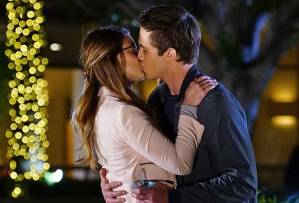 Kara and Bizarro have several meetings throughout the hour, each of which leaves Bizarro wondering if Supergirl is really as evil as Maxwell Lord says she is. But when Alex and the DEO attack Bizarro with Kryptonite, assuming it will have the same effect on her as it does on Kara, the chemical not only strengthens the enemy and does her complexion zero favors also but makes her really, really angry — so angry, in fact, that she gets on board with Maxwell’s plan to eviscerate Ms. Danvers.

Meanwhile, as Bizarro threatens the city, Kara attempts to have a normal love life with Cat Grant’s son, Adam, an endeavor that goes very well before going very badly. Though their first two dates are filled with cavity-inducing levels of flirtation (and an electric first kiss), Kara ultimately breaks things off with Adam when her Supergirl duties start getting in the way of their relationship. (Poor Kara, always having emotional baggage that is a thousand times worse than her romantic interests’ woes.)

Let’s cut to the chase: Bizarro ultimately kidnaps James but is nearly won over when he  James waxes poetic about his adoration for Kara and her kind heart. Alas, when he is spied plotting an escape, Bizarro uses her fiery breath in dangerously close proximity to him — seriously, how did he not walk away with at least a few burns? Kara though hears James’ yelps and arrives in time to swoop in and kick some Bizarro butt until Alex can plug her with bullets full of harmful anti-Kryptonite.

Of course, even with Bizarro vanquished, Kara’s still got her fair share of problems. First, even though Maxwell Lord winds up in solitary confinement at the DEO, he does still know Kara’s big secret and, therefore, poses a huge threat. Plus, when Kara arrives home from her latest day of crime-fighting, she finds her apartment has been invaded by an out-of-this-world tendrilled organism, which pounces on Kara… just as we cut to black. Mercy!

What did you think of Kara’s encounter with Bizarro? Hit the comments with your thoughts on the latest episode!