We don’t have a ton of background information about Lucca Quinn, Alicia Florrick’s plucky law partner on The Good Wife, but I wouldn’t be shocked to learn she’s a graduate of Hogwarts School of Witchcraft and Wizardry (House Gryffindor, of course).

Think about it: With just a penetrating gaze, she finally freed Alicia from the prison of emotional disconnectedness where she’s been locked away since the death of Will Gardner. Also this week, Lucca dropped a reference to something called the Brotherhood of the Robe — which sounds verrrry wizardly, no? And (call me crazy for this) I’m pretty sure she whispered, “Expecto libido!” as she left Alicia alone with sexy muggle Jason Crouse — right before the mood turned all bah-chicka-wah-wah between ’em. 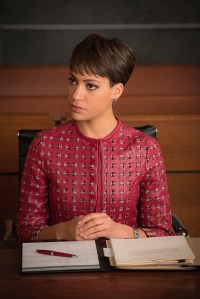 Whether she’s a witch or just wonderfully human, though, there’s no denying Lucca deserves a slow clap and a standing O for not just standing by Alicia during her darkest, coldest hour, but for pushing for the truth of our titular protagonist’s mental state, a task too scary for Eli, too late for Cary and/or Diane, too personal for Ruth, and not even on Peter’s radar. (All in favor of the immediate dissolution of the Florricks’ marriage, say “aye!”)

But “Judged” — the title of this week’s installment — isn’t really Lucca’s story. It’s about Alicia under siege: Facing a malpractice suit that’ll bankrupt the offices of Florrick-Quinn, suffering a bruising loss in court against a very dangerous opponent, learning the full truth of Will’s deleted voicemail, but finally doing something other than tensing her jaw and going numb over all the bad news. I’m not sure if Alicia’s got her groove/pulse back permanently, but with only nine episodes left in the season (and possibly the series), I sure as hell hope so.

* Alicia learns that her second Bond Court client, Clayton Riggs, is still behind bars on $150,000 bail — without his day in court… after eight months… for a mere disorderly conduct charge — by Judge Schakowsky (Christopher McDonald). She decides to sue her old nemesis for violating the guy’s civil rights, but it doesn’t take long before she’s slapped in the face by the reminder that the system is designed to protect those practicing behind the bench — and after the suit goes down in flames, Clayton hires Alicia and Lucca’s old Bond Court frenemy Bernie Bukovitz to sue Alicia for malpractice, to the tune of $1.5 million. 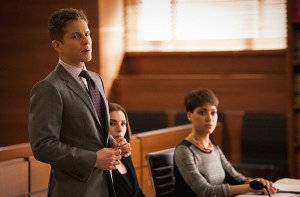 Alicia hires Cary to represent her in an attempt to get the suit dismissed, but when it proceeds to trial — and the other side won’t settle — Mr. Agos sees his opportunity, inviting Alicia to return to Lockhart-Agos-Lee as a junior partner despite all the toxic water under the bridge. He’s got his bourbon, she’s got her red wine, and all she can do is howl with laughter. Am I crazy for interpreting that response as a tentative “Yes” — and for assuming the deal extends to Lucca, too? How many Good Wife episodes is that now that have ended with somebody inviting somebody else to join their firm/go into business together?

* Jason returns from Silicon Valley bearing oven mitts for Alicia — a sly signal that she needs a little protection from his scorching hot presence? — but her response is deeply wan, and later, she can’t even get it all the way up (the corners of her mouth, for a grin) as she contemplates his gift. Oh, did I mention Lucca meets with him, too — she’s surprised Alicia neglected to mention his return to Chicago — and chides him for screwing with Alicia’s head? I love how she waves off his “Oh, I’m just a guy’s guy — I don’t know what I do to women” attitude. Because, c’mon, dude must know his power.

Meanwhile, though, Alicia visits Eli to rehash the exact details of the voicemail he deleted back in the day. “You’re torturing yourself!” he cautions, but Alicia plays a trump card when she reminds him it’s her right to do so. And so Alicia hears Eli’s crushing recollection, right down to the part where Will said that if she didn’t reply to him, he’d know just to return to business as usual.

When Florrick and Quinn finally get a chance to dish the impending suit that could cripple their firm, Alicia is downright snippy over Lucca’s meetup/friendship with Jason, and Lucca’s reply, “What’s going on with you, partner?” is loaded with “don’t freeze me out!” indignation. Alicia wanders off to transfer a load of laundry to the dryer — and the symbolism isn’t lost when Lucca follows her and asks meaningfully, “Would you like to talk?” Yes, it’s finally time for some dirty laundry, Lucca!

Alicia begins to explain how she was in love once, how the man died, and then spills her recent discovery of that deleted voicemail. It’s just enough to open her floodgates, and before either woman knows what’s happening, Alicia is in tears. “Now I’m sick to death of everything,” she says bitterly. “The fact that things get dirty. The law. Just standing here.” But it doesn’t end there. “I’m drinking like I never have before — and all I wanna do is have another one,” she admits, before sharing she just wants to climb into bed, pull the covers over her head and never do anything again. “I just want it to end!” It’s a devastating scene, powerfully played, the only false note coming when Alicia says she’s not sure she likes her kids anymore (which makes no sense, given the amazing support Grace has given her over the last year, right?!).

Lucca’s in tears by the end of the speech, too, wrapping her pal in a hug and saying “Alicia, you’re here because I need you here.” And then she does something beautiful — explaining to Alicia that in spite of all the sadness in her life, the one thing she can choose is to accept her friendship — all she has to do is say she’s willing. (I love how Lucca actually makes her utter the words out loud, and then double checks that Alicia doesn’t keep guns in the apartment. “You scared me there for a minute.”

* Alicia’s explosive display of emotion — after months of walking around in a depressive haze — seems to unblock her in other areas. When she apologizes to Jason for being so distant about his return, he tells her that “even when I’m not fine, I’m really fine,” and she chases him into the elevator and gives him the kind of kiss we’ve all been craving since dude interviewed to be her investigator. (What’s with Alicia and elevators, by the bye?) He clearly hasn’t forgotten their lip lock when he tells her later that he got offered a permanent, high-paying job at Lockhart-Agos-Lee — but didn’t accept it yet, worrying Alicia might think it was because she planted one on him. “You should do what’s best for you,” she says. And then Jason grabs her and does a little investigative work with his tongue — until her phone rings, she answers it, and denies us all a Jeffrey-Dean-Morgan-tearing-off-his-shirt scene.

Perhaps even more important than Mrs. Florrick’s sexual reawakening, though, is what transpires between she and Eli. He comes to her door late in the hour making one more plea for forgiveness. “You did end up with Will — and I did not keep you from doing that,” he reminds her of the couple’s post-voicemail trajectory, and then adds, “I’ve never been more sorry for anything in my life.” We see Alicia soften before our eyes, knowing that despite the betrayal, the man in front of her is one of her people. Just as she says she’s willing to accept Lucca’s friendship, here she proves she’s willing to do something to preserve her bond with Eli, too. “OK, Eli, you’re forgiven,” Alicia smiles — maybe because with her professional and financial world crumbling down, she realizes the value of having people who, flaws and all, remain in her corner. (Now can we please get some martinis of mutual forgiveness with Diane next week?)

What did you think of this week’s Good Wife? Did the Alicia-Lucca scene move you to tears? Were you stoked that Alicia and Jason kissed — or are you still pining for one of her prior paramours? Sound off in the comments!