Here’s who absolutely must watch (or DVR) Episode 2 of London Spy (airing tonight at 10/9c on BBC America) — right after On-Demanding Episode 1:

* Anyone who’s ever been single, met a total stranger and almost immediately wondered, “Could this be the one?”

* Anyone who fancies a psychological thriller packed with “I didn’t see that coming!” twists 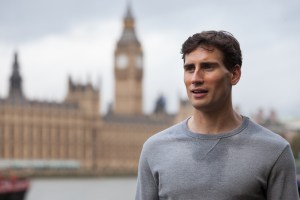 If you don’t recognize yourself in any of the aforementioned categories, I implore you to tune in to London Spy anyhow — because it’s possible you don’t even know what’s in your own heart and mind.

I’m deeply hesitant to say too much about London Spy‘s setup — because the surprising ways in which its tale unfolds are among its greatest pleasures. All you really need to know is this: Danny (Spectre‘s Ben Whishaw), a sullen warehouse worker stumbling through London after a night of clubbing, has an unexpected run-in with a kind (and very dashing) jogger named Alex (Wolf Hall‘s Edward Holcroft). While the boyish Danny is open perhaps to a fault and investment banker Alex is far more buttoned-up, their crackling chemistry eventually grows into love — before a shocking discovery throws everything between them into utter chaos. 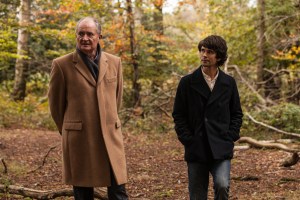 By the time you reach the halfway mark of Episode 2, you’ll be so overcome by an intense sense of paranoia that it’ll leave you questioning not only the motivations but the actual identities of every person who enters the picture. Whishaw is a revelation carrying the burden of the action on his shoulders and infusing Danny with just enough of a twitchiness that every so often you wonder about the reliability of his POV. As his older gay confidante, Jim Broadbent (Iris) manages to be sympathetic and prickly, pathetic and menacing, sometimes all at once.

Better still, the five-part mystery is so artfully shot, it manages to turn a mundane crumpled sports-drink bottle into an object of romantic obsession, a wrapped dinner plate into something potentially sinister.

But — like the characters in this wonderfully one-of-a-kind thrillfest — let me clutch my secrets close to my chest (perhaps with the use of duct-tape). Trust me, after an hour or two of London Spy, you’ll be whispering about it to your co-workers or sending cryptic encouragements to friends and family to do the same.