There would appear to be a vacant seat aboard the Waverider.

This week on The CW’s Legends of Tomorrow, Rip Hunter’s team tracked Vandal Savage to an illegal arms sale, where during the ensuing, guns-a-blazing skirmish part of Ray Palmer’s Atom suit snapped off and got left behind. In Savage’s hands and if reverse-engineered, the tech is projected to fast-track the immortal’s fire-and-brimstone conquering of Earth for the year 2016 — 150 years sooner than feared!

As part of the team sought out a sensor (in the possession of professor Stein’s 1975 self) to track the missing tech, Ray and Snart set out to steal the ancient dagger that is capable of ending Savage’s long, long, lonnnng life. And though their thievery gets interrupted by the Big Bad himself, Hawkman aka Carter Hall ne Prince Khufu (played by Falk Hentschel) gets his hands on the artifact and plunges it into his arch enemy’s chest…

…only to see it have no effect.

Instead, a laughing Savage pulls the blade right out, unscathed, and then drives it into Hawkman, fatally. (As the hirsute menace explains, only Hawkgirl/Kendra/ Chay-Ara is able to use the dagger to truly and forever kill Savage.)

Since Hawkman is fated to be reincarnated, does that mean that the next baby born in 1975 will be his latest self? Putting him at about 40 years old when Kendra et al return to 2016? Not quite.

“It gets a little complicated because he died ‘out of time’ essentially. He didn’t die in 2016” but during a time trip, Legends executive producer Marc Guggenheim explains. “But the way that the reincarnation works is once they both die” — the latest incarnations of Khufu and Chay-Ara — “that’s when the clock gets reset for them, and that’s when two babies are born.”

Again (and again), Guggenheim notes that the specific circumstances of Hawkman’s latest death are “complicated.” So perhaps viewers won’t have to wait for Hawkgirl to also die — and then wait out/time-jump ahead 20 to 30 years — to see him again?

What did you think of Part 2 of the series premiere? 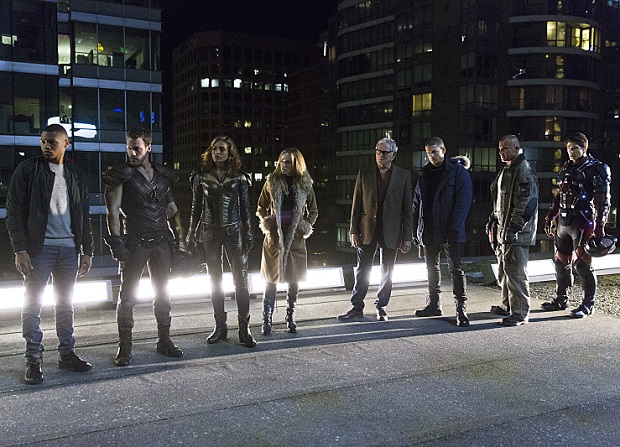