Chances are, you won’t hear a Kenny Rogers classic playing in the background of The Good Wife anytime soon (eclectic as the show’s soundtrack can sometimes be). And yet as CBS ponders the fate of its acclaimed Sunday-night drama in the wake of creators Robert and Michelle King announcing they’ll step down as showrunners at the end of Season 7, here’s hoping they’ll heed the immortal words of “The Gambler” and prove they “know when to hold ’em, know when to fold ’em… know when to walk away, and know when to run.”

Sure, the show’s last fresh episode on Jan. 18 marked a season-high rating (8.1 million viewers and a 1.2 demo rating), but for network brass, this has to be — or at least should be — a decision that’s as much about legacy as it is about numbers.

Imagine, for a second, an eighth book in the Harry Potter series penned by someone other than J.K. Rowling. Or a revival of 30 Rock without Tina Fey in the writers’ room.

An eighth season of Good Wife without its creators seems similarly blashphemous — especially since the husband-and-wife duo have been quoted as saying they always approached the series with a seven-year plan in mind, and are reportedly plotting a season finale that will serve as their idealized series finale.

Titular star Julianna Margulies added fuel to the fire last weekend when she joked at an event honoring the Kings (and chock full of casting directors) that she’ll be unemployed come April. Yet while her remarks kicked off a firestorm of “Is there a Good Wife without the good wife?” conversations, the truth of the matter is this is the Kings’ story — warts and green screens and all. Without their keen eye for backroom politics (both in the office and on the campaign trail), their insight into the 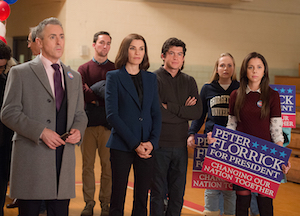 maddening, madcap world of the U.S. justice system and their wicked, wicked wit (that gives The Good Wife a better laughs-per-minute ratio than 90 percent of current sitcoms), it’s hard to fathom the series having garnered a whopping 39 Primetime Emmy Award nominations since 2010.

It would be disingenuous not to note that, since its landmark fifth season, The Good Wife has become an altogether less consistent and less satisfying beast. In fact, as I pointed out in my recap of the Jan. 18 installment, “in the wake of the death of Josh Charles’ Will Gardner, the core characters of CBS’ Sunday-night drama have been doing their best impressions of hamsters on wheels — working themselves into sweaty lathers but winding up exactly where they started their journeys.”

And then, of course, there’s the matter of the show’s alleged behind-the-scenes drama, a point utterly unworthy of mentioning, except for the fact that efforts to keep separate Margulies’ Alicia and Archie Panjabi’s Kalinda ultimately damaged the quality of what was happening onscreen — and resulted in one of the most infuriating/laughable green-screen moments in TV history. (If that last sentence has you utterly bewildered, just click here.)

Fan favorites Christine Baranski, Matt Czuchry and Zach Grenier have been given about as much to do in Season 7 as Ben Carson during a Republican debate about foreign policy. Other characters — Finn! Zach! Robyn! — have fallen from the radar like that Democrat who’s not Hillary or Bernie.

And yet still, for Good Wife die-hards (there are still close to 10 million of us, BTW), hope blazes almost as hot as the chemistry between Alicia and Jeffrey Dean Morgan’s Jason. That’s because the Kings have personally penned the scripts for “Oppo Research,” “Dramatics Your Honor,” “Everything Is Ending,” “Red Team, Blue Team,” “Blue Ribbon Panel,” “Great Firewall,” “Pilot,” (and especially) “Hitting the Fan” (aka one of the great hours of modern television).

So, if the Kings have a destination in mind for Alicia Florrick and all the characters in her orbit, they’ve certainly earned the right to deliver them to that location — without anyone tampering with the GPS at a later date. If that’s not convincing enough for you, consider this: If CBS makes the official cancellation announcement in the next week or two, Margulies, Baranski, Czuchry & Co. will be freed up for Pilot Season 2016.

Do you think The Good Wife should wrap after Season 7? Or would you like more seasons with a new showrunner? Take our poll below, then expand on your thoughts in the comments!