Just over two-and-a-half years ago, before she first booked her Arrow role, Caity Lotz could not have imagined that she would one day come to be regarded as one of TV’s premiere badasses.

Back then, “I was deep in my indie film world,” the actress recalls. “I was coming off of Mad Men and then doing The Machine, The Pact, those movies….

“And if you can go back, like, further than that, I didn’t think I’d be acting!” she continues. So to have played a key role on Arrow during Season 2, loom large for much of Season 3 (in death) and now segue to DC’s Legends of Tomorrow, where she’s a co-lead, is “definitely not” something Lotz could have anticipated. And having come and risen this far, she puts simply with a smile, “has been fun.”

On Legends, Sara Lance has adopted the mantle White Canary as she helps Time Master Rip Hunter’s hodgepodge of heroes and villains hunt down Vandal Savage, who is fated to conquer the planet. But whereas on Arrow the 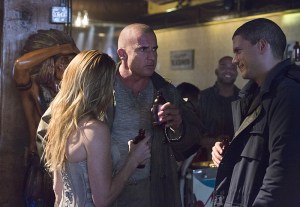 onetime League assassin was quite intense (especially after that date with the Reaper), here — in a bid to be “a hero in the light” — she gets to smile a bit more if not unapologetically seek out a good time.

“Sara still gets a lot of that darkness, which I like, because that’s what everyone really liked about her — that complicated weight she had,” Lotz observes. “But it’s fun to not have to take myself so seriously.”

Indeed, the Legends premiere saw Sara gleefully lead the charge into a raucous bar fight. In Episode 2 (airing Thursday at 8/7c), she further dives into the 1970s, getting her flirt on with a younger Dr. Stein and maybe dabbling in a doobie whilst sporting go-go boots and a mini-dress. (“I liked that outfit a lot,” Lotz notes. “I feel like I as a human should have lived in the ’70s.”)

As the timey-wimey adventures unfold, Sara will develop distinct dynamics with her fellow Legends, turning what heretofore have been familiar, supporting characters into fully formed co-leads in their own right.

“Everybody’s character is so strong, so specific, and I love that,” Lotz effuses. “Sara and Snart (aka Captain Cold) are the most similar, like, anti-heroes, but they’re heroes. They’re good people. 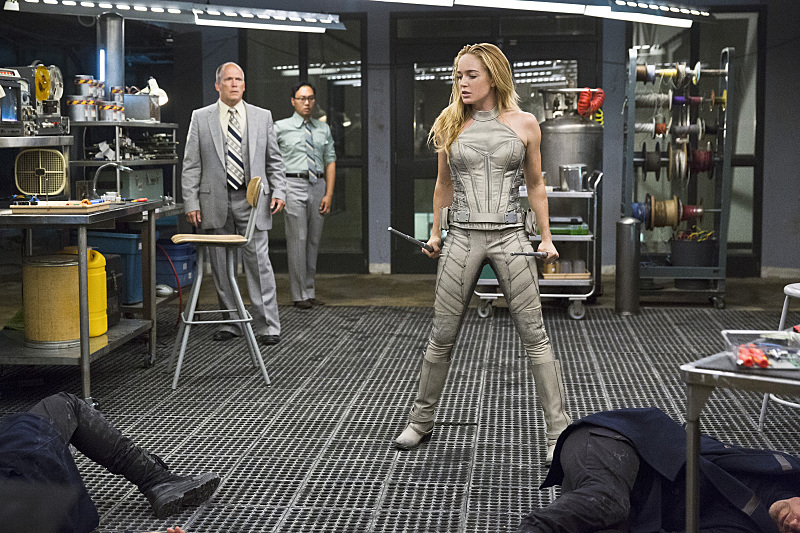 And Ray always has the funniest lines, because Brandon [Routh]’s character is so nerdy. And I love Arthur [Darvill]’s character, because Rip Hunter is such a performer when he’s talking. Everything is so dramatic!”

Along with Snart and his more hot-headed half, Mick Rory/Heat Wave, Sara represents the Waverider’s brute force division, the ones to let fists, elbows, batons and bo staffs fly when the going gets tough. “I’m doing more fighting — and bigger fighting — than I ever did on Arrow, and that part of the job is pretty cool,” the actress shares, noting that the day after our interview she is “very excited” to film a “huge” melee in which “I’m going to do myself, like, the whole fight.”

As for Sara’s sometimes-glimpsed softer side, Lotz says that DC’s Legends “isn’t about love” for her character, or at least not anytime soon. Yes, an upcoming episode will feature a lesbian nurse (played by Bomb Girls‘ Ali Liebert) whom Sara warms up to (“The 1950s weren’t very open about that, so that’s a thing”), but “Sara needs 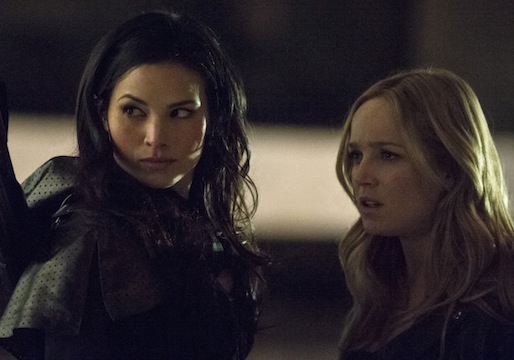 to focus on herself” right now, having barely dodged permanent death.

“It’s not about finding a life partner. It’s about finding her own life right now,” asserts the actress. Though at some point, Lotz hopes to offer closure to fans of her Arrow romance.

“I love Katrina [Law], and people love ‘Nyssara,’ so I think they want to see more of that — and hopefully we will,” she offers. “But we’ve got, you know… we’ve got some time.”