The CW’s Arrow this week offered a tale of two Felicitys as she who typically watches over the field team came to terms with her new “ringside seat” to the rest of her life. Would she be able to rise to the occasion when some nasty A.R.G.U.S. business darkened the Diggles’ doorstep?

Though in Oliver’s company Felicity did her best to put on a brave face — (unsuccessfully) lobbying for a “Hot Wheels” code name — she couldn’t help but question her immediate value to Team Arrow. “What I do bring to the team is my mind,” she agreed, “and there’s a lot on it.”

Indeed, once alone and cycling through her painkillers, Felicity is visited by her younger, Goth self, an uninvited guest to her “pity party.” “You used to be me — a strong, confident brunette,” the hallucination taunted. “But you wasted it all away to play superhero.”

Despite wanting to eventually ease back into her role running comms and such, Felicity is sought to offer ASAP cyber-assistance when Oliver, Diggle et al storm a free port being used by the A.R.G.U.S.-hating Shadowspire organization. Alas, with her Goth self looming large and offering the precise opposite of moral support, that dry run almost goes terribly sideways when Felicity accidentally entraps Oliver, leaving Diggle briefly captured.

Later at the loft, Felicity expresses to Oliver her sense of guilt, as much as he tries to dismiss it. After all, he knows he pushed her to get involved when she was signaling she was not ready. But will she ever be ready enough for so intense a duty? “There is no going back to normal,” Felicity fears. “I can no longer be a part of the team… [because] I can’t do the one thing I’m supposed to be able to do.” When Oliver attempts to console his distraught love, GothFelicity pesters and pesters, to the point that the blonde snaps, seemingly ordering Oliver away.

Working out some of his frustration by sparring with Laurel, Oliver also shares his worry that Felicity’s setback is payback for when Barry Allen/The Flash tinkered with the timeline during their crossover face-off with Vandal Savage. Felicity meanwhile spars with her Goth self, demanding: “What do you want to tell me?!” The hallucination reminds that when boyfriend Cooper “died,” Felicity resigned herself to “never rely on anyone else ever again,” that it was her “against the world.” Instead, she wound up playing superhero — “and look what it got you, 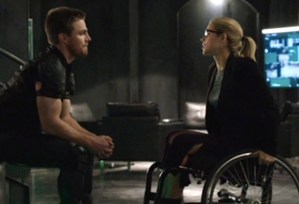 a ringside seat to the rest of your life.

“You thought you were such a badass,” the brunette scoffs as a final jab.

But for all Goth-licity’s rudeness, she roused something in her older self, who later puts in an appearance at the lair (lack of ramps be damned). She admits to Oliver that she had been mired in pity, until she realized that her younger self was too angry to ever help people. But now, in this phase of her life, she is not. Nor should anyone let the paralysis keep them down. “I’m here to tell you it wasn’t your fault, or mine,” Felicity assures Oliver. Instead, the sole blame falls on “one man with an extremely on-the-nose, alliterative name, who we are going to stop — because it’s what we do, it’s who we are.”

At episode’s end, Felicity shows to Oliver —and then symbolically torches — a photo of that “rebellious brunette hacker who didn’t listen anyone’s rules but her own.” Oliver then shares his own measured hope for the future, convincingly noting, “I’ve seen people speed and shrink and fly, come back from dead…. That is the world we live in now. So I will not stop searching it until we find away to make you walk again.” 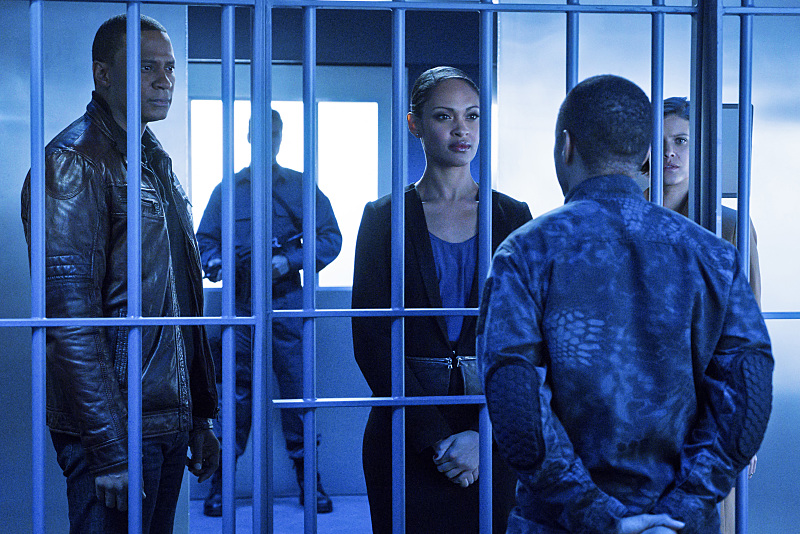 for Felicity’s struggle was the assassination of one of Lyla’s A.R.G.U.S. old colleagues, which brought her, Dig and Amanda Waller head-to-head with Shadowspire. (In flashback, we learned that during their Afghanistan tour together, Diggle and Andy were wooed by ER‘s Malucci to skim some off the top of a commandeered opium cache. We also see that Oliver’s oneday island nemesis Reiter is Malucci’s superior.) Now,  Malucci is a Shadowspire lieutenant, and he wants Waller’s codes for something called Rubicon. When Waller makes clear that no threats to her team will make her break, Malucci offs the boss lady herself, leaving Lyla in charge.

Getting wind of Shadowspire’s infiltration, Diggle plots with Andy, who’s being held at A.R.G.U.S. With help from Oliver, Laurel, Thea and a re-energized Felicity — code name OverWatch (“I thought about Oracle, but it’s taken,” Oliver asides) — the Diggles and Lyla best Malucci and his men, then toast to the fallen Waller.As testament to how far the brothers’ fractured relationship has come, Diggle invites Andy to crash with him and Lyla — and meet his niece Sara.