Two weeks ago, American Crime viewers looked on as Regina King‘s Terri LaCroix — who had just narrowly missed being involved in a car accident — used her clout at the local police department to exact revenge on the at-fault driver.

The well-connected matriarch may soon need a bigger favor from her pals at the PD: In tonight’s episode (ABC, 10/9c), she learns that Leland High’s sexual assault scandal that has ensnared her son is now being classified as a rape.

“So much of who [Terri] is is identity. It’s very important to her that [the LaCroixs are] looked at as a family on top,” King tells TVLine. “She’s in a position where she can take a photo of a guy’s license plate and make a phone call and something can happen to him. [But] what happens when she doesn’t have that power?” 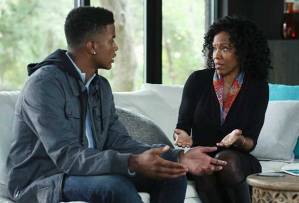 King says tonight’s fourth installment will explore what happens when Terri can no longer use her elite status to get her son out of hot water. But the more pressing question for Terri and her husband, Michael (played by André Benjamin), will be whether or not their son actually was involved in the rape at the captains’ party.

“That is the hugest thing for Terri and Michael. It’s less about the boy-on-boy of it all, but that it could possibly be our son that has committed a rape,” King shares. “I have failed tremendously as a parent if that is the case. It’s terrifying to have that feeling.”

King — who previously played a Muslim woman on American Crime‘s first go-round, and won an Emmy for the role — said she is acutely aware of how the show reflects real-life situations, particularly in this week’s episode, which she considers one of the season’s most powerful.

“For teenagers and parents, this is one show to watch together,” she teases. “It is very hard to be a teenager, especially during these times when kids are doing so much of their communication not face-to-face and hiding behind keyboards. You’re going to see how emotionally trying it is for these parents and for these teenagers in this piece.”

American Crime fans, what are your thoughts on Season 2 so far (and King’s polarizing character)? Tell us in the comments below.