This Tuesday on The CW’s The Flash, Barry dealt with a most unexpected visit from an old foe, Cisco felt extra-good vibrations, Patty used her noodle and an unfortunate event united the Wests.

YELLOW, IT’S ME | Upon arriving in our time, Eobard Thawne sought out Mercury Labs’ Christina McGee, for the purpose of using her tachyon tech to get back to the future. (How is he alive? Because this marks Eobard’s first trip back in time, so he had not yet become the Nora-killer who got “erased” in the Season 1 finale. Time remnants, people!) Cisco meanwhile aspires to fine-tune his “vibing” ability, which Harry solved by deducing that an adrenaline rush triggers it. Harry jerry-rigs a snazzy visor for Cisco to use, and when he does he is able to observe the time that Eobard eventually kills McGee — almost four hours from now. More on that in a few paragraphs….

MOM’S THE WORD | When Joe delivers 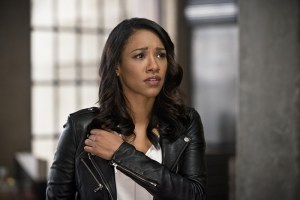 the sad news that Francine’s battle with cancer is about to end, Iris goes to her estranged mother’s bedside. There, Iris shares her only regret: that when she reflects on childhood memories, she wishes her mom and brother had been a part of them. Iris says her mother should have resurfaced sooner, seeing as “I would have forgiven you then, just like I’m forgiving you now.” When Francine longs to have the whole family reunited before she passes, Iris reaches out to Wally, but he’s “busy” — meaning angry, that his sister and father were a secret to him all this time. Iris tells him about Eddie, the fiance suddenly taken from her, using the tale to illustrate the importance of saying a proper goodbye when you can. Eventually, Wally shows up at Iris’ doorstep, asking if she’ll go with him to see Francine a last time.

TWIN PIQUED | Caitlin shares with Barry the news that Jay is dying, and suggests they track down his Earth-One doppelganger to get some healthy DNA to transfuse, or something. Barry, though, comes up empty in finding our Jay. Apprised of the search, Jay takes Caitlin to the park to point out his counterpart — bespectacled Hunter Zolomon, who apparently was adopted and raised under a different name.  Alas, since the speedster process mutated Jay’s DNA, Hunter is of no value — though his DC Comics origin story sure makes one’s mind go… zoom.

THE TRUTH IS OUT THERE | When Barry lets slip that he and Joe help out the S.T.A.R. Labs peeps now and again, Patty gets curious — and uses her detective skills to realize that many of Barry’s cases 1) involve The Flash and 2) have details the CSI could not possibly have known. She confronts Joe, but Joe keeps mum. And even when she asks Barry point-blank — saying that if he ‘fesses up, she will stay in Central City! — he holds firm with a denial, even if taking that stance leaves her in tears. “It would have been nice to fight crime by day and be with you at night,” she laments, leaving. At episode’s end, Patty rings Barry from her train to Midway City, saying something about a gunman. The Flash races to the scene… and is summarily busted by the false alarm. (Not Patty’s best moment, by any means. Ugh.) Having confirmed and seemingly understanding the need for his secret, she assures, “Everything’s good” as they finally (kind of awkwardly?) part ways.

BACK… TO THE FUTURE! | Once Cisco 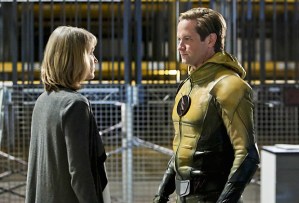 tracks down an activated tachyon gizmo, Barry races to the scene to stop Eobard from killing Christina. A chase ensues, but The Flash catches up to his evil opposite and whales on him good. (Joe in fact has to intervene, to avert a murder!) But after Reverse-Flash is locked up in the Pipeline, Cisco’s nosebleeds get worse and he begins seizing and phasing away, Marty McFly’s parents-style. Harry deduces that it’s because they affected the timeline by capturing Thawne, and thus must release him and get him back to his future. Begrudgingly, Barry sets his mother’s killer free, then combines their speed to catapult Thawne to whence he came, instantly reviving Cisco.

What did you think of “The Reverse-Flash Returns”?