Making good on Season 5B’s mantra (“to hell and back”), Tuesday’s Teen Wolf revealed its proverbial underworld. So, um, can we go back now?

The big discovery — 23 corpses, strewn about like a Renaissance painting of the fiery pits — came during Papa Chris and Grandpappy Gerard’s search for the Beast of Gevaudan. Of course, any Teen Wolf fan worth his/her/their salt knows by now that there’s really no point in looking for an enemy. Somehow, they always manage to find you.

And find them it did! The Beast — who, stop me if I’m crazy, kind of looks like Stitch on steroids — interrupted Malia’s long-awaited, highly-dreaded showdown with the Desert Wolf. Honestly, I’m pretty sure the D.W. would have downed her daughter’s blood like a Go-Gurt if Big Stitch hadn’t crashed through that brick wall. (Side note: Stopping the D.W. also allowed for Deaton and Braeden’s escapes, so, I’m starting to think this Beast might not be such a bad guy.) 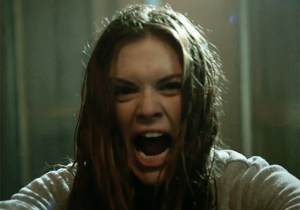 Granted, he’s not the only one who helped Malia in her way-too-real game of Family Feud; after finally mastering her scream, Lydia pushed out a massive yelp that managed to stop the D.W. dead in her tracks. (Don’t ask me how, though. Seriously, the only thing I understand less than regular science is Teen Wolf science.) She also fought a bunch of guards outside Eichen House, which thrills me, because it means the two timelines of Season 5B have finally merged! (We’re caught up, guys. We did it.)

Speaking of merging, Theo — who was totally working with the D.W. and therefore sucks — met with Deucalion this week, at which point the self-proclaimed Demon Wolf revealed what he wants more than anything else is… Scott’s eyes! (I would’ve gone for his strong jaw, but to each his own.) So there’s another fun thing his pack will have to deal with on top of everything else.

Hey, at least we ended the episode with the whole pack gathered happily under one roof, plotting the rescue of its last missing member. This show’s gotten so dark and confusing, I sometimes forget that these people are all actually friends.

Teen Wolf fans, your thoughts on this week’s hectic hour? Drop ’em in a comment below.