Now that Shadowhunters‘ Clary and Simon are adjusting to their new supernatural surroundings, it’s time to throw another breed of nighttime creature their way. Enter… the vampires.

Following his kidnapping at the end of last week’s episode, Simon finds himself a prisoner of some pretty unsavory vamps this Tuesday (9/8c) — including an enticing little number named Camille Belcourt.

“She’s going to give Simon an introduction to the Downworld that isn’t given to most mundanes,” Alberto Rosende tells TVLine. “The audience will see how the Downworld works, how it’s very much a political place. We’ll also learn more about the threat Valentine poses to the vampires.” 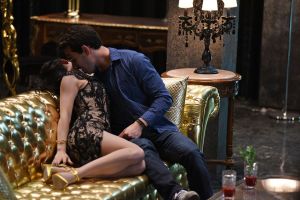 As for that whole drinking blood thing…

“I can honestly say that was the first time,” Rosende says. “It was awesome, though. The whole scene in the hotel was one of my favorites to shoot. It’s the first time Simon gets a glimpse into the supernatural world without Clary. This all seems fake to him at first, but being dragged into this world makes him realize the danger is real. It scares him, but it also makes him more determined to be with Clary.”

Speaking of being with Clary, Rosende says he loves the show’s portrayal of the Simon/Jace rivalry.

“There’s that contentious relationship between them, Jace being the ultimate protector and Simon being the ultimate best friend,” he says. “They offer two very different but very real things — she wants that comfort, but she also needs Jace to lead her through this new life. We dive into it in a new way, but it’s very much still a competition between them.”

As a reader of all six Mortal Instruments books, Rosende is fully aware of the changes that occurred while bringing Cassandra Clare’s saga to the small screen. But rather than scoff at the differences, he embraces them. 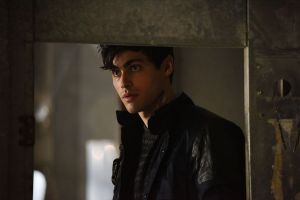 “In the books, they talk about the Institute having this beautiful antiquity, representing this ancient world, but I really like how our show made it full of technology,” Rosende says. “That’s one thing that kind of needed to happen, from my perspective as a fan, because it makes sense that the Shadowhunters would be using all the technology that mundanes have offered them. Seeing it all come to life was so cool.”

He also knows that Simon wasn’t crooning Neil Young songs in Clare’s books — a change he not only embraced, but also hopes to continue.

“I didn’t sing in my audition, they just asked me if I could,” he says. “They said, ‘We either want Simon to be really good or really bad,’ and I didn’t think I was really either. … I learned guitar for the show, and if Season 2 comes about, I’m hoping the opportunity to perform gets to come around again. It’s a big part of Simon’s life.”

Your thoughts on all things Simon, vampires and Shadowhunters? Drop ’em in a comment below.