Damon appears to be trading in the Salvatore mansion for a cozy, no-bedroom apartment on Skid Row.

TVLine has an exclusive first look at an upcoming episode of The Vampire Diaries, airing Feb. 12 at 8/7c on The CW, in which Stefan and his older brother appear to be bumming around a less-than-desirable neighborhood in Mystic Falls. 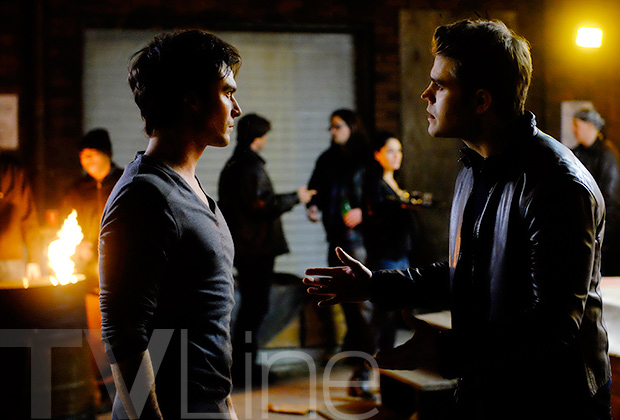 But what exactly are they doing there? Perhaps the answer lies in the episode’s official description:

When his experience in the Phoenix stone leads him to do the unthinkable, Damon finds himself without a care in the world, spiraling out of control and under the influence of a dangerous and reckless Julian. Refusing to give up on his brother, Stefan attempts to reason with Damon only to uncover the devastating reason for his descent.  Elsewhere, Caroline begins having some dangerous side effects as a result of her supernatural pregnancy and is forced to turn to Valerie for help. Meanwhile, Bonnie, Nora and Mary Louise attempt to track down a ruthless vampire hunter named Rayna after they suspect that she has reemerged.

Damon’s “dark descent” begins when TVD returns from its winter hiatus on Friday, and executive producer Caroline Dries tells TVLine we’re in for — wait for it — a hell of an episode.

“You might be asking, ‘What show am I watching?’ when you turn on the TV,” she teases. “We’ll be dealing with the fallout from the winter finale for a while, both emotionally and plot-wise.”

TVD fans, your thoughts on Damon’s (latest) downward spiral? Drop ’em in a comment below.