Syfy’s The Magicians attempted to do a lot more than pull a rabbit out of its hat during a two-hour premiere on Monday.

But did the fantastical adaptation of Lev Grossman’s popular book trilogy turn out to be a magical time? Before you chime in with your thoughts on the new series from executive producers Sera Gamble (Supernatural) and John McNamara (Aquarius), a recap of the two-hour premiere:

Quentin (played by Aquarius‘ Jason Ralph) and Julia (Chicago P.D.‘s Stella Maeve) are grad students and longtime BFFs who discover a secret university for the magically inclined. The depressed Quentin passes the entrance exam for Brakebills College for Magical Pedagogy and finds a place where he may finally belong. Julia, however, doesn’t make the cut to attend — and then cuts herself so she’ll remember the experience despite the mind-wiping administered to rejects.

At Brakebills, Quentin meets a variety of students: his tough guy roommate Penny (How to Get Away With Murder‘s Arjun Gupta), hipster guide Eliot (Hale Appleman), “bad girl” Kady (Murder in the First‘s Jade Tailor), social butterfly Margo (Lucky 7‘s Summer Bishil) and loner, magical savant Alice (CSI: Miami‘s Olivia Taylor Dudley), who is at the school to get answers about her brother’s death.

The “poor, little magic girl,” as Eliot dubs her, has a tendency to swiftly walk away in her chunky heels and babydoll dresses when approached by fellow students. (Margo mocks one outfit as something a nun would wear, but I’ve never seen a nun in such a short hemline!) However, Quentin is able to break through her walls after a dream – featuring a warning to stay off “the garden path” from the fictional character at the center of his favorite book series, Fillory and Further – leaves him with a burn in the shape of a symbol from one of Alice’s books. She tells him it means to contact the other side, but while attempting to reach her dead brother, they accidentally unleash a moth man with no face known as The Beast. That cues up the pilot’s haunting final sequence, in which The Beast freezes the class, then proceeds kill the professor, rip out the eyes of Dean Fogg (Supernatural‘s Rick Worthy) and peer at a frozen Quentin all while practically skipping through the room. 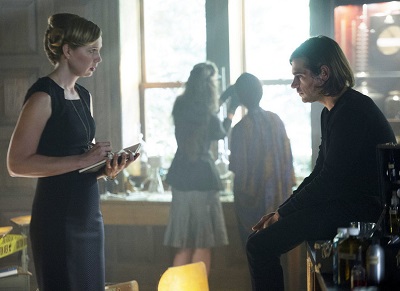 As hour two of the premiere gets underway, we learn that Alice sent The Beast back to his world and Quentin and his pals are now under investigation by Professor Sunderland (Covert Affairs‘ Anne Dudek) since that spell required stealing a book from the Dean’s office. Penny gives up his roomie’s name, but rather than getting expelled, Quentin is given a second chance by the school’s specialist, Eliza (Game of Thrones‘ Esme Bianco). See, there’s something greater afoot. “I knew he’d come, but I swear I didn’t know so soon,” Eliza says of The Beast, while visiting a bed-ridden Fogg.

“No one is ready,” he replies. “Quentin, Penny, they’re not built for this… All we can do is make them magicians.” 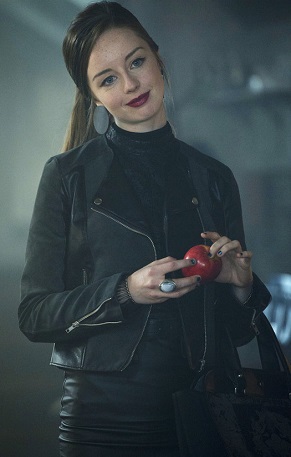 Meanwhile, after falling down a hole of desperation, Julia finds another, more underground way into the world of magic via the Hedge Witches. (The creepy guy she meets in a bar didn’t want to rape her using his telekinetic powers; he just wanted to bring out her potential. Sure!) Julia is put through a initiation test, after which she learns her fellow witch-in-training, Marina (Hannibal‘s Kacey Rohl, fantastic as always), is actually the powerful leader of the group. Marina’s also got something on Kady, who’s secretly stealing things from Brakebills for her.

Plot-wise, The Magicians has plenty of intrigue and suspense, but Quentin and Co. need to break past their archetype characters into something more interesting and fleshed out. At the moment, I’m more drawn to Julia and her mysterious friends than any of Quentin’s classmates. The show is also greatly boosted by an excellent recurring guest cast in Worthy, Dudek and Rohl.

But what did you think of The Magicians? Grade it via the poll below, then hit the comments to back up your pick.