“When I first started reading the script, I thought, ‘Come on, she’s just a kid. All kids go out and drink and party, that’s just what they do,'” star Jessica Sula, who plays Maddie, tells TVLine. “But the dangerous thing about it — and the scary thing, once you read about the statistics of teen addiction — is the normality of that, which leads to abuse, which leads to addiction.”

Of course, accepting her addiction is only the first step (no pun intended) on Maddie’s road to recovery (again, no pun intended). In order to keep herself on the straight and narrow, she’ll need to avoid temptations — including Wes Stewart, one of her new sober housemates at Springtime Meadows.

“She doesn’t want to be there, so a boy being there is a nice distraction,” Sula notes. “Until she realizes it goes deeper than that, and it could even affect Wes’ sobriety. … That’s really, really, really bad. They shouldn’t go out whatsoever.”

And that’s not even taking into account that Maddie already has a boyfriend, one with absolutely no clue that she’s currently fulfilling a school-mandated 90-day stay at a sober living facility. Having to keep her recovery a secret from her friends at school adds an extra layer of complication to Maddie’s life, especially when all she really needs is their support. 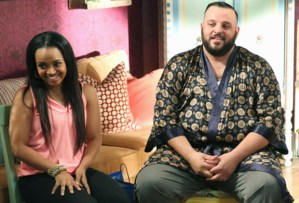 Fortunately, she finds ample — though somewhat rotating — shoulders to lean on within Springtime Meadows, including a bubbly roommate named Trish (The Proud Family‘s Kyla Pratt), a robe-clad snack lover named Vern (Looking‘s Daniel Franzese) and even someone with an uneasy connection to Maddie’s past (Glee‘s Lindsay Pearce).

“Ultimately, it’s about Maddie figuring out herself,” Sula concedes. “She has to figure out whether or not she has an addiction, and I think the show encourages people to think about that.”

Will you tune into Recovery Road tonight? Drop a comment with your thoughts on the new Freeform drama below.