ABC’s Agent Carter is on a new mission (Tuesdays at 9/8c) — one that has improbably paired a mysteriously frozen woman with sunshiney, avocado-loving Hollywood.

Already in her travels out West, Peggy has awkwardly reunited with new SSR chief Daniel Sousa, reignited her banter with Howard Stark’s manservant Jarvis (as well as met her stoic sidekick’s bubbly missus) and made the acquaintance of the dashing Dr. Jason Wilkes. Alas, the latter soon enough met a to-be-revealed fate after both he and movie star Whitney Frost had a nasty run-in with some ominous “zero matter.”

TVLINE | Coming out of Season 1, what was on your “wish list” for Season 2?
More humor and romance, and maybe a glimpse into Peggy’s childhood — and we got all of that. I feel like I need a writing credit! [Laughs] We established the tone in Season 1, we established the key characters, we’d gotten Peggy to a point with that final line, “I know my value,” and she was able to move on from the grief of losing Steve — and in the meantime made a couple of new friends. So I think the second season, setting it in L.A., is brilliant because it gives us this total kind of change in color and brightness, that this is a woman who is no longer in mourning. And then we see all the friendships coming back, her and Howard, her and Jarvis in particular, and that’s really where a lot of the comedy lies.

TVLINE | The Peggy/Jarvis dynamic must be so much fun for you, because the interplay is so entertaining.
That’s really lovely to say because we really love working together. I’ve known James D’Arcy and I’ve known Dominic Cooper (who plays Howard Stark) nearly my entire career — which is only 10 years, but 10 years is a long time — and we’re very comfortable with each other, we know the buttons to press, 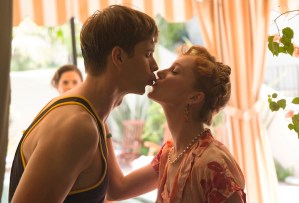 how to keep each other on our toes. That means we’re a lot more willing to open up and try new things and play on set, and I do hope that fun comes across.

TVLINE | How would you say the relationship with Jarvis has evolved in Season 2? What new texture has it acquired?
In Season 1 Peggy was slightly reluctant to use Jarvis. He was a pain in the ass, the middleman between her and Howard, so she felt like she “had to” keep him close. He was a bit interfering, a bit of an idiot, a bit of a babbling buffoon and completely incapable of getting any of the jobs done. But he was willing, and there’s sweetness in that, an affection. He’s got great charm and integrity and he’s really there for her. It’s a friendship that becomes more important in Season 2, both professionally and personally. You see Ana Jarvis (Outlander’s Lotte Verbeek) and how strong that marriage is, how that really is the rock that ties Jarvis to any purpose he has in life. That evolves very beautifully, and it also becomes a very important part of the mission. It all gets entwined.

TVLINE | You spoke of Peggy’s romantic life opening up some, after being off the table for Season 1. What in your mind happened between her and Sousa (played by Enver Gkokaj)? What epiphany did Peggy apparently have?
Well, it’s interesting because at the end of Season 1, she turns him down, because it was bad timing — that maybe there will be another time for that drink. And in Season 2 you discover that he’s gone off to California, so nothing obviously happened. 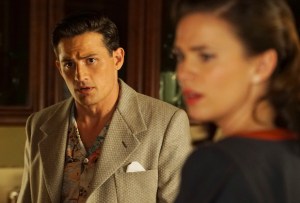 And then you find out Thompson uses the lie that Sousa specifically asks for Peggy, and that’s the motive for her going [to L.A.], except she discovers quite quickly that Sousa had no part in any of this — and that he’s not available. It suggests to me that they’re pretty crap at organizing themselves when they were in the same office together in New York. They were very awkward, they didn’t know how to do the professional/personal thing. He may have felt rejected by her, not feeling he could ever live up to Steve Rogers. She might have felt like, “I can’t get close to anyone at work because every person I get close to seems to die.” It’s probably a mixture of all of those things. So now we have this situation of him not being available but they’re working together and there’s clearly chemistry between them. It’s funny to me because it’s kind of Peggy’s Achilles heel. She’s so capable in other areas of her life apart from the romance department, so she’s inevitably going to be making mistakes as she goes along.

TVLINE | I loved the work you did in that scene where it dawned on Peggy that she had not been specially asked for. My heart broke with hers a bit.
Oooh, yeah, that must have hurt. That must have been slightly humiliating. I have this vision that Peggy was on the plane the whole way to L.A. thinking about what she was going to wear, how she was going to be, picking out the outfit the night before…. How she wanted to play it cool but totally was fantasizing about her life with Sousa, and then the crushing reality when she realizes that he didn’t call for her must be quite humiliating.

TVLINE | What sort of adversary do you have in Whitney Frost (The Newsroom’s Wynn Everett)?
She’s a whole different kettle of fish. What’s interesting about her is she is this scientific genius and the mastermind behind certain things, and yet she is hidden by the incredibly public persona of being a Hollywood movie star. 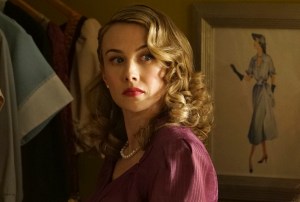 It’s a very sophisticated thing to be able to do, to hide in broad daylight when the whole world is starting at you with no idea what’s gong on behind your eyes. That makes for a fascinating nemesis for Peggy because she’s really met her match here. She knows that she absolutely cannot trust her and she must be working extra hard to catch up with Whitney and follow her clues. Also, I think she’s the other side of the same coin to Peggy — she just uses her power for a force of bad. But Wynn is so funny. She really makes this role her own and she really gets into it. When we would be at the read-through, she’d be doing her portrayal of Whitney as this narcissistic movie star, I was just in stitches! Doing this whispery ethereal voice, all breathy and dramatic…. It was so funny to watch, because Wynn is so different in life.

TVLINE | Is it safe to say that Dr. Jason Wilkes (Reggie Austin) will not quite be himself the next time we see him, after his encounter with zero matter?
Uhhh, yeah, I think that’s really safe to say. There will now be a physical barrier between her getting to get near him. And once again, she’s put this person that she cares about in the firing line, so she’s going to have a lot of guilt… feeling like it’s all her fault that he’s in this situation that he finds himself in. So yeah, a bit of drama!

TVLINE | What do you think draws her to Jason?
It’s the same thing she likes in skinny Steve, the same things she likes in Sousa —how these three men in particular have built character from adversity. You have skinny Steve, who has his own physical limitations but then within that was a man of integrity who shared the same values Peggy has. In Daniel Sousa, you also have a man wounded in the war who is not as able as the men around him but, despite that, 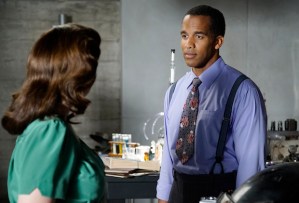 he’s probably the biggest and best man out there as far as his integrity and his sanity. And then you also have Jason Wilkes, who because of his skin color all the doors have been closed to him. No matter how intelligent a man is, to be in that circumstance at that time when it just wouldn’t have been possible without extraordinary strength of will and character. In the face of adversity, who do you become? Some people fall by the wayside or to go into the victim mentalist. Other people rise from it and it becomes part of their identity and what defines their strength. As a woman in a male-dominated environment, Peggy has a kindred spirit with these three men.

TVLINE | Is it me or is Jack being extra-contentious with Peggy?
Yeah. I think Peggy treats Jack with a bemused tolerance. Although he’s chief and kind of bosses her around, he knows that she’s often going to be outwitting him and doing a really good job, whatever his orders are. So there’s a mutual understanding there. They don’t like each other but they deal with it best they can. But it’s also quite interesting how that unfolds, because a lot changes between them as the episodes go on. He does some pretty bad things.

TVLINE | And I have to imagine your business with Dottie isn’t over?
Ohhh, no. That’s really, really fun. You can see how Bridget [Regan] is trained as a dancer, because she’s got that discipline which she brings to her work. Every line is almost choreographed. She’s always incredibly well prepared, so I always know I’m going to enjoy the scenes with her because she has a laser sharp focus, and that’s what she brings to Dottie — this almost manic determination.

TVLINE | And lastly, what’s the coolest thing you’ve gotten to do this season? Having at the heavy bag in Episode 3?
[Laughs] Oh, I loved plunging headfirst into the pool [after that scene], it was great fun. There are a couple of moments with Jarvis toward the end of the season, a scene I just love between Jarvis and Peggy that is fueled by so much venom and passion… that only two friends who know each other really well can have. It’s like when you fight with your best friend, they know your absolute buttons to press, so it made for a very exciting scene to play with James. And because he is in life one of my dearest friends, we can quite easily go to that place, so that was very thrilling.