If Syfy’s The Magicians goes “poof!” and disappears after its first season, it won’t be for lack of ambition.

Based on Lev Grossman’s best-selling fantasy trilogy, the series’ two-hour premiere (airing Monday at 9/8c) packs so many tricks up its sleeve that the whole enterprise occasionally threatens to split at the seams.

Still, while EPs Sera Gamble (Supernatural) and John McNamara (Aquarius) create a sometimes hectic pace as they introduce and advance at least a half-dozen major arcs in a mere 120 minutes, they never leave you bored.

The Magicians centers on Quentin Coldwater (Jason Ralph), a smart but troubled grad student with floppy hair and a slightly mopey personality who — along with his childhood best friend Julia (Stella Maeve) — gets an unexpected invitation to take the entrance exam for Brakebills University — a secret school of magic in upstate New York. Quentin makes the cut, Julia does not, but both of them are forever changed by the newfound knowledge of the mystical world that’s all around them — and the fact that they’re among the subset of humanity imbued with these special abilities.

While Quentin and Julia’s fractured bond seems central to The Magicians‘ overall arc, the premiere introduces us to almost a dozen additional characters whose competing and often surreptitious agendas mean you won’t be able to fold your laundry or check your Twitter feed while watching. 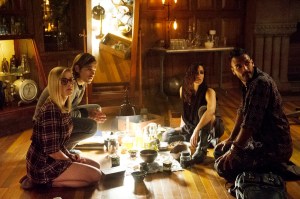 There’s fellow Breakbills student Alice (Olivia Taylor Dudley) — a brilliant but sullen freshman determined to learn the truth about her brother’s disappearance. There’s Dean Fogg (The Vampire Diaries‘ Rick Worthy) and Eliza (Esmé Bianco) who seem to know more about Quentin, his destiny and the threat imposed by a creature known as The Beast — even if they’re not exactly sure what to do about all of it. There’s Penny (How to Get Away With Murder‘s Arjun Gupta), Quentin’s frenemy roommate — who showcases some very interesting skills in the bedroom. And there’s Marina (Hannibal‘s Kacey Rohl), who brings a jolt of bitchy, menacing energy to Episode 2 as the leader of an enigmatic organization that may (or may not) stand in opposition to Breakbills’ agenda.

If that’s not enough to hook you, we also travel inside Quentin’s mind to meet Jane Chatwin, one of the protagonists from the children’s fantasy book Fillory and Further who’s got dire warnings for our protagonist about staying off “the garden path” — and who may not be as fictitious as Quentin originally believes.

The premiere doesn’t skimp on cool/scary effects — The Beast certainly has a signature look about him! — and does a particularly good job at balancing intel and question marks to hint at a deeply intriguing overarching mystery.

Its biggest weakness is a not-entirely-balanced cast. While Rohl is a hoot, and Maeve makes palpable Julia’s pain and disappointment over her Breakbills failure — and allows us glimpses of a potentially dark ambition — Ralph’s portrayal of Quentin needs to evolve past gloomy befuddlement and Panetene-ad tresses if The Magicians is going to succeed in the long term. (The same can be said of Dudley, whose weird loner is alarmingly one-note for a potentially major character). Hopefully, as more is revealed about Quentin and Alice, that pair of actors will be able to step up and match the magic (so to speak) of their more charismatic counterparts.

The TVLine Bottom Line: The Magicians may not have perfected every incantation in its spellbook, but it’s worth a look for viewers intrigued by the idea of a Harry Potter-esque weekly fantasy series.