Remember when Anna decided not to tell Bates about her pregnancy until she knew she was out of the woods? Well, there was a slight change of plans on Sunday’s Downton Abbey.

Because Bates is a far craftier man than Anna realized — she’s clearly forgotten about the time he spent in prison — he quickly sniffed out the bun in her oven, prompting a spillage of beans. Well, some of the beans. I’m not a pregnancy expert, but I know a thing or two about sharing information, and saying “You’re not wrong in all of it” is not the same as saying “I thought I was having a miscarriage, so I went to London for a terrifying medical procedure, and now I’m 85 percent sure I’m in the clear.” But hey, who has time for the truth?

Of course, Anna’s hush-hush trip to London wasn’t all bad; Mary used her time in the city to “grab lunch or a drink or… something” with Henry Talbot, currently on loan from Alicia Florrick. I’m not rooting for these two quite as hard as I was last season, so I loved this wicked little exchange towards the end of their “date”:

Mary: I hope this means you’re boiling up to make a pass before we’re done.
Henry: Probably. But will you accept?
Mary: No, but I shall enjoy the process enormously. 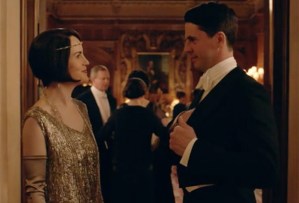 I don’t feel that Henry challenges Mary in the same way Matthew and Tony did, but he has the rest of the season to prove me — and more importantly Mary — wrong. Then again, I wonder if she’ll even be able to handle his obsession with driving at life-threatening speeds. Love interests dying in car accidents is a been-there-done-that territory I doubt Mary cares to revisit.

And while I’m talking about Mary, I have to salute what may have been her finest mean-girl moment to date: After applauding Edith’s progress at the magazine, Mary waited for her sister to exit the conversation before adding, “A monkey will type out the Bible if you leave it long enough.” She is the Dowager Countess’ granddaughter, no doubt about it.

THERE’S SOMETHING ABOUT ROBERT | Downton‘s been scattering little bread crumbs about a potential health issue for Robert all season, and this week, it dropped the whole damn loaf. Between his “I can’t drink port anymore” revelation to his near spill on the stairs with Cora, it’s become irrefutably clear that all is not well with Mr. Crawley. I’m not surprised the show is putting Robert in mortal danger for some last-minute drama, but I would be surprised if he’s reunited with Isis before the series is over. (His dead dog Isis, not the terrorist group — though both would be pretty surprising.) 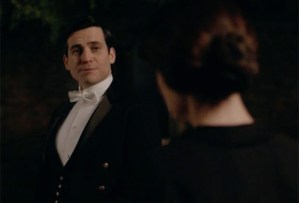 SUICIDE WATCH | Should we be worried about Thomas? First he said he “never felt more of a lack of reason” in his life, then busted out the ‘Why doesn’t anyone like me?’ routine, all the while staring towards a hopeless post-Downton future. I get why no one likes him — exposing Gwen to the Crawleys was an example of classic Thomas douchebaggery — but I never thought their words bothered him. That is, until he straight-up told Baxter, “I mind what people say.”

LAW & BORE-DER | Because someone at Downton must be in legal trouble at all times — see exhibits A(nna), B(ates) and C(rawleys) — Ms. Baxter learned this week that she’s being called to testify against Peter Coyle, the man who used her, and many other women like her, to carry out his thieving misdeeds. This seems like a hefty story to be put on Baxter and Molesley’s shoulders in the final season, but maybe it’ll become… something.

* The Crawleys decided to give Mr. Mason that farm, so hopefully we’re done hearing the words “farm,” “Mason” and — God willing — “Daisy” for the remainder of the series.

* You know what, let’s add “hospital” to the list of words I never want to hear again. While I’ve enjoyed seeing the Dowager Countess hurling insults left and right — Maggie Smith has been in rare form this season — I’ve never cared about a storyline less than I do this hospital nonsense. I hate to see the show’s final season being muddled down with such filler.

* Am I the only person who feels robbed that we weren’t shown any footage from Carson and Mrs. Hughes’ honeymoon? I didn’t need them to install a camera in their bathroom, but a little hand-holding montage would have been nice.

* Tom thinks he might also get involved with race cars. (In other news, I would absolutely watch a Downton Abbey spinoff about Tom racing cars.)

* Speaking of Tom, I’m glad to know he feels badly about stealing Mrs. Hughes and Carson’s thunder by overshadowing their homecoming with his own. And I wasn’t the the least bit surprised that Robert assured him, “You didn’t.” (That man can’t read a room to save his life.)

Downton Nation, do you see good things in Anna’s uterus’ future? Is Henry enough man for Mary? And is Robert not long for this world? Drop a comment with your take on all of this week’s developments below.