Fans of the Lucifer tale from DC Comics’ Vertigo imprint who plan to tune into the new Fox series Monday night (9/8c) should brace themselves for a very different story.

While there are “elements of relationships” from that source material, the show is “very much its own being,” explains star Tom Ellis (Rush), who wasn’t aware the project was based on the graphic novel when he took the job. “I’m sure there will be some people very unhappy about that. But if people watch it for what it is, then they’ll soon forget.”

Ellis also acknowledges that the program “may be billed as a procedural cop drama,” but that’s not an entirely accurate description, he argues. “It’s about [Lucifer’s] experience of learning about humanity and people and interaction and emotions.”

Below, Ellis and his co-star Lauren German (Chicago Fire) elaborate on their characters’ love/hate chemistry, Hell’s denizens and more.

THE DEVIL YOU DON’T KNOW | Ellis’ take on the legendary baddie, who helps the LAPD while running a nightclub, is — as you no doubt surmised — far less evil. “He likes to have fun with people,” Ellis says, adding that the City of Angels proves to be a very “different world” for Lucifer. There, “the most irredeemable character” begins “the ultimate redemption story.”

‘SHIPPER ALERT | Although German’s homicide detective Chloe finds herself frustrated by Lucifer’s shenanigans as her unlikely tag-along partner in crime-solving, she can’t quite bring herself to cut him loose. “He always seems to help her in a real way…with the case,” the actress explains. But given all their bickering, is there anything Chloe likes about him? “More than she would want anyone to know!” German replies with a laugh. “She’s in complete denial. There is a completely stifled part of her that is sexually charged when he’s around. But she would never, not even to her best girlfriend, admit that… But, also, every day it’s a different woman [with him], and that grosses her out.” 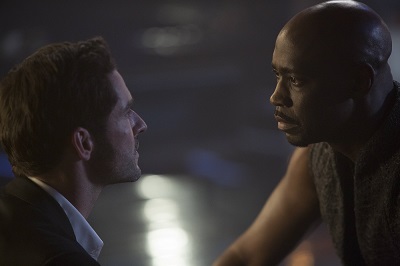 BACK IN HELL | Rounding out Lucifer’s hellish world are his trusted companion, the demon Maze (The Librarians‘ Lesley-Ann Brandt), and God’s emissary, the angel Amenadiel (24‘s DB Woodside). The former “came with me to Earth under the promise that I’d probably only be here a short while,” Ellis shares, “and I’ve deferred and deferred and deferred because I’m quite enjoying the experience.” Amenadiel, meanwhile, is on a mission to bring Lucifer’s topside vacation to an end. “The overall order of divinity is slightly askew and not working,” Ellis previews. “So he wants me to go back [to Hell] and fulfill my role. Otherwise, something awful might happen.”