The 100 returned for its third season on Thursday, which means it’s time once again to forget everything we thought we knew about The CW drama’s wild (and quickly expanding) world.

Murphy, who went fifty shades of cray while stuck in the bunker, was reunited with Jaha in A.L.I.E.’s mansion. (“She didn’t end the world,” the former chancellor said of his new holographic bestie. “She saved it.”) Over in Arkadia (clever!), Raven butted heads with Abby, Bellamy got himself a new lady friend, Jasper continued his descent into post-Maya madness and Octavia scoffed at Lincoln’s new duds, accusing him of becoming one of “them.”

Of course, Thursday’s premiere was no walk in the park for panther-slayer Clarke, either. Now known as Wanheda (aka “the Death Commander”), she’s become a target for every bounty hunter on the planet — including an ice kingdom resident named Roan, who finally achieved his mission in the episode’s final moments. (Hey, at least Clarke got to have some fun with Niylah before being whisked off by her frozen prince, right?) 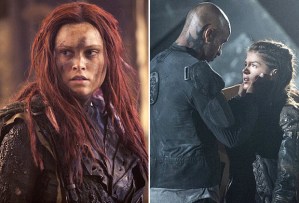 Though it was probably strange for many viewers to see Clarke spend an entire episode away from her friends and family, consider this: “My initial thought was, ‘Wouldn’t it be interesting if Clarke never even showed up in the first episode until the very end?'” Rothenberg revealed to TVLine. “But I don’t think I could have written the premiere without her being in it the whole time. … Over the course of the season, she’ll need to put what she’s done into perspective and accept who she’s become. She’ll need to own her own power. Will she make peace with it? That remains to be seen. I don’t know if she ever will, but she certainly needs to rediscover her own humanity.”

“It was important for me to show that life has moved on; Clarke’s been away for three months,” Rothenberg says of the surprise romance. “New relationships begin, old relationships end, things change. That struck me as an interesting thing to do and to explore for him. This relationship will motivate him going forward. I assume the ‘Bellark’-ers won’t be happy, but no one is happy all the time. Eventually, they will be.”

Your thoughts on The 100‘s big return? Grade the premiere below, then drop a comment with your full review.