Since last September, Heroes Reborn has been taunting viewers with two things: (1) the inevitability of a massive, solar flare-induced apocalypse, and (2) the hope that Tommy, Malina and the rest of the Evos could save the world from its terrifying end.

Well, I’ll give you the simple answer first: Yes. Of course. (Even Tim Kring can deliver a happy ending!)

But here’s the more complicated, timey-wimey answer: In Thursday’s series finale, the fate of the world is ultimately left up to Tommy (er, Nathan, if we’re really getting technical). After getting rescued by Ren from Evernow‘s Eternal Fortress, Tommy realizes that, unlike Hiro Nakamura, he can actually be in two places at once. (Trippy!) 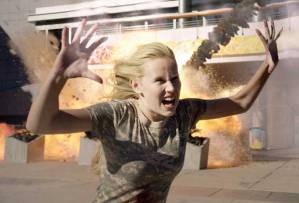 So, without wasting any time, Tommy duplicates himself, sending one version to the present day (where Malina is trying to ward off the big solar flare) while another version remains in Renautas’ 7,000-year-ahead future. (Long story short: Tommy destroys the futuristic Gateway, managing to save everyone except Erica Kravid. Huzzah!)

In the present-day, Tommy and Malina join hands and try to stop the solar flare together, but it doesn’t work. They need a conduit who can absorb their powers and sacrifice himself in order to shut down the apocalypse, and that lucky guy is Noah Bennett. Despite Tommy and Malina’s protests, Noah accepts his destiny: to die, if it means saving the world.

So, even though the infamous cheerleader couldn’t be saved, it’s her dad that ultimately preserves humanity in the end. (And Noah isn’t the only casualty of the hour; Luke and Phoebe are sacrificed for the greater good, too.)

Three months later, it seems that each of the Evos have gone back to their regular lives — that is, until Tommy and Malina are both introduced to yet another disconcerting prophecy that involves twins. When Malina asks Angela Petrelli what it all means, Angela says, “It means your father is coming back for you — but this time, no one can protect you.” (Then again, since NBC has opted not to renew Heroes Reborn, it doesn’t seem that Angela’s ominous prediction will come to fruition. Or at least, not for another five years, when the franchise is inevitably rebooted again.)

Were you satisfied with the Heroes Reborn finale? Grade it in our poll below, then hit the comments with your final thoughts!