Supergirl fans, you might want to savor the fun, quippy side of Winn Schott while it lasts. Because in tonight’s episode (CBS, 8/7c), that lightheartedness is nowhere to be found.

Though Jeremy Jordan‘s lovesick IT whiz has mostly been utilized for a well-placed one-liner, the character will enter much darker territory when he is reunited with his estranged father, Winslow Schott, Sr. aka DC Comics’ The Toyman (played by Revenge alum Henry Czerny).

Considering Winn has previously told Kara about his dad’s bad deeds, Jordan is able to sum up the father-son relationship in just two words: “Not good.” 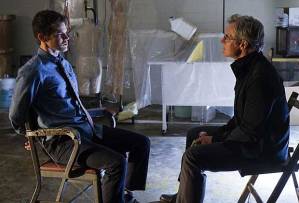 “It parallels Kara’s relationship [with her birth parents] a bit, because she feels abandoned even though they had to do what they had to do,” Jordan shares. “For Winn, it was abandonment without a reason and without understanding. We’ll learn a little more about why and what that was. He’s definitely holding on to some deep, dark emotions when it comes to confronting his dad that are brought to the surface very quickly.”

In fact, Winn’s interactions with his father won’t just be contained to this week’s hour. According to Jordan, those deep-seeded daddy issues will have a ripple effect across the rest of Season 1 and will largely explain why Winn is so quick to deliver a punchline.

“You start to see what’s behind the fun quippiness and why Winn is like that. Nobody’s that light-hearted all the time,” he teases. “It’s compensating for something. We really get to have an idea of why he’s always being the happy-go-lucky guy. It was a really challenging episode for me.”

But that doesn’t mean Winn is immune to the evil that runs in his family. Though Jordan admits it’s “going to take a lot for Winn to go [to the dark side]” and perhaps one day succeed his father as a next-gen Toyman, “it’s clearly in his blood. I can’t rule it out, because I don’t know what their big plans are for the whole series.”

Supergirl fans, are you looking forward to Winn’s big episode? Hit the comments!