There are a few things you can always count on during every Supergirl episode: Kara’s curls will always look flawless, no matter how fast she’s flying. Cat Grant will deliver a one-liner better than anyone in National City.

And, most of all, the CBS series will make you really appreciate your family.

In this Monday’s episode, it wasn’t Kara’s evil aunt who was wreaking havoc, or Cat’s icy mother who was slinging insults. It was Winn’s homicidal father, Winslow Schott, Sr. — aka The Toyman, due to his toy-making past — that was causing all the trouble.

After escaping from prison, Winslow tracks down his son and tries to enlist him in yet another murderous scheme. The ultimate goal? Assassinate a fellow toymaker, Chester Dunholtz (with whom Winslow has bad blood) and blow up all of Chester’s adoring fans with the help of 10 bombs planted at National City’s toy convention.

It probably goes without saying that Supergirl saves the day; thanks to her X-ray vision and icy breath, she is able to save the convention-goers and put Winslow back in jail before any of his bombs can be detonated. But the real highlight of the hour is the effect this father-son reunion has on Winn. After Winslow arrives in town, Winn confesses to Kara that he’s afraid he’ll end up like his dear old dad — and when Kara vehemently tells her friend that would never happen, he leans in for a kiss… and is promptly denied. Oof. 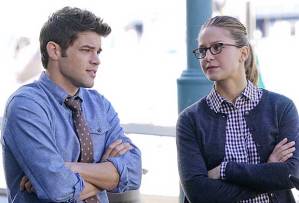 But instead of sweeping the smooch under the rug, Winn decides to tell Kara how he really feels about her, for fear that bottling it up will cause him to become a villain like his dad one day. “I’m in love with you,” Winn tearfully tells Kara in the CatCo offices. “I have been in love with you for a long time, long before you were Supergirl.” (Kara/Winn ‘shippers, I can practically hear your squeals from here.)

Kara, as we all know, doesn’t feel the same way about Winn, but maintains that she doesn’t want things to change between them. Still, when Winn turns back to his video games and blows off Kara’s dinner invite, it’s pretty clear that their friendship won’t be the same. (Sob!)

* In an effort to get intel on Maxwell Lord’s ulterior motives, Alex — wearing a fabulous LBD — joins him for a dinner date (with a side of manipulative flirtation). The technology guru remains tight-lipped about his intentions, but unbeknownst to Alex, he attaches a teeny-tiny camera to her purse before she leaves — and when he’s spying on her later that night, he discovers that she is indeed Supergirl’s sister.

* While Alex is wined and dined by the real Maxwell Lord, J’onn J’onzz puts his shapeshifting powers to good use and pretends to be Maxwell in order to break into Lord Technologies. Once there, he discovers the Jane Doe that’s being kept in a super-secret room, before being forced to use his (extreme) memory-wiping ability on a suspicious security guard who seems to know that Maxwell isn’t really Maxwell.

* Meanwhile, in Love Triangle News: Lucy Lane is offered a job at CatCo, which immediately makes things weird between her and James. Even though James tries to brush it off and pretend that Lucy’s new job is merely making him question his own ambitions, we all know he’s just dreading the proximity between Lucy and Kara. (And considering Kara always seems to be lurking in the corner while James and Lucy are kissing, I can’t say I blame him for being wary.)

OK, your turn. What did you think of Monday’s Supergirl? Hit the comments with your thoughts on Winn’s big confession and more!