This Tuesday’s episode (NBC, 9/8c) “dives a little bit deeper into why Connor has come back [to Chicago], and there’s a big storyline with D.W. Moffett as my dad,” his portrayer Colin Donnell previews. “He contributed quite a bit of money to the hospital in the name of my mother, who committed suicide,” which was “a very public thing” considering the Rhodes family’s standing in the city.

As a result, the episode offers “a lot of insight into Connor’s background and why he is the way he is,” the actor continues. “They handled the doling out of the information in a really wonderful, indirect way.”

Below, Donnell also talks about Connor’s tension with colleague Will Halstead and his not-so-serious hospital romance. Plus: The actor reveals how he would like to return to the Arrowverse as Tommy Merlyn — it ain’t nice — and whether he could lend his Broadway chops to NBC’s next live musical.

TVLINE | Can the relationship between Connor and his father ever be repaired?
I don’t know. Not without some serious, serious work. One of Connor’s biggest hurrahs was just the fact that he was able to come back, he was able to deal with enough of his own issues that he could bring himself to return to the city where so many deeply hurtful, tragic things happened for him. It’ll be interesting to see how it comes up again and where their relationship goes. But at this time, nobody’s willing to work on it, really.

TVLINE | Is there a particular incident that prompted him to come back to Chicago and take this job? Did something happen?
It was Goodwin. [She] handpicked him and offered him the position. If there was any one catalyst, it was her presenting him with the opportunity, and him being in a place where he was ready to accept it. 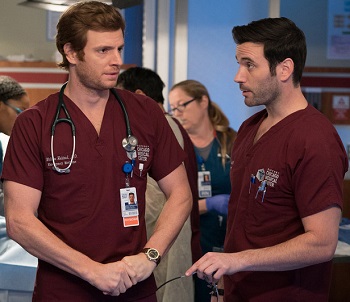 TVLINE | How is relationship between Will and Connor going forward? Is it still as tense?
It doesn’t get any better in next week’s episode, I’ll tell you that. [Laughs] For the time being, they each still have their own way of approaching the job, and they don’t always jive with one another. Hopefully, they’ll be able to find their way. Ultimately, they are two men from different backgrounds who actually share a pretty common tragedy in their lives. And they’ve arrived at the same place, obviously. Maybe they took different paths to get there, but they share a lot more in common than they think they do. They could be very good friends in the end.

TVLINE | How is his romance with the other surgeon progressing?
It’s still going at the moment. It’s a workplace romance, so there’s a clandestine nature to it that always puts a strain on things. And they’re surgeons, so they are inherently competitive, which is always an interesting dynamic. 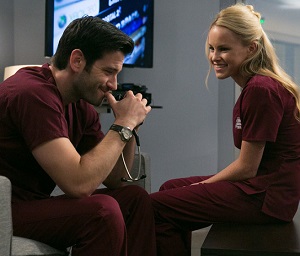 TVLINE | Might we see you as Arrow‘s Tommy on Legends of Tomorrow since it’s time traveling into the past?
I’m all down for it. I would be so happy to be back on Arrow or on Legends of Tomorrow, in whatever capacity. There’s got to be something where an evil Tommy pops up. I want him to be totally different than what he was before. 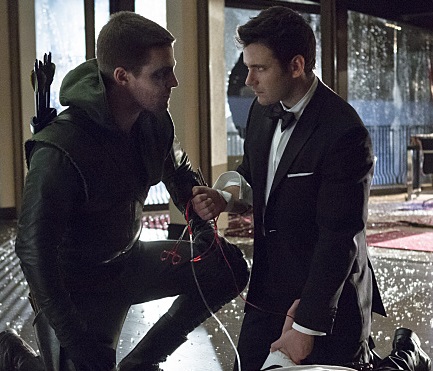 TVLINE | So Earth-Two Tommy on The Flash?
Yes! That would be amazing! We need to talk to [executive producers] Marc [Guggenheim] and Andrew [Kreisberg]. How do we make this happen? I need a day off from Med first… I love those guys. I’ve always said, any time they’ve got stuff for me, if it works out with the schedule, I would love to come back, and even more so now. I haven’t felt like I’ve left the family in any way.

TVLINE | NBC announced that they’re hoping to do Hairspray as their next live musical. Would you be interested in participating? Could you logistically do it?
Logistically, it would be hard, unless they were doing the entire thing in Chicago. Those things are difficult, and it’s a huge undertaking for those guys. I think [NBC President] Bob [Greenblatt] said, when they did Sound of Music, they were doing a brand new thing, a live musical in the modern era. Each year, they’re learning and figuring new stuff out, and I think it’s great that they’re pressing forward. [Executive producers] Neil [Meron] and Craig [Zadan] are amazing. The fact that they’re continuing to evolve and progress with them, it’s awesome.