Arrow is pointed in a very dark direction when the CW series resumes Season 4 this Wednesday at 8/7c. Who if anyone will be able or willing to stop him from crossing lines in the name of revenge?

When last we tuned in, Damien Darhk had ordered a brutal attack on the limousine taking Oliver and his fiancee Felicity away from a campaign event. Oliver escaped unscathed, but Felicity took a lot of fire. With his love in no condition to quell his anger, Oliver’s want for revenge is at risk of going unchecked. Or will he receive unexpected counsel from a frenemy?

TVLINE | What are you most excited about, from the back half of this season?
I think we’re really excited to see the final confrontation between Oliver and Damien Darhk. I mean, this is the first season we’ve launched a Big Bad in the premiere and tracked him all the way through. When we left at the end of 2015, he’d obviously done something really horrifying. One of the things we’ve been most excited about is exploring how Oliver’s going to react — What is he going to do, and will he go back on who he’s become, and become darker? Will he go back to more of a Season 1 type Oliver, who’s willing to kill, to go to those dark places to get revenge?

TVLINE | In that respect, who’s the angel on his shoulder and who’s the devil?
Felicity was always the angel on his shoulder — and whether she is or is not going forward I will leave everyone to find out when Episode 410 airs. But Dig is interestingly also someone who’s always been his moral compass, and one of the things that’s interesting about this season is that we have taken everybody who would normally rein 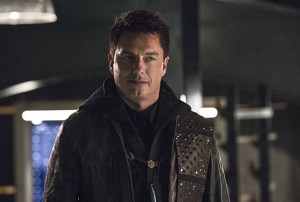 Oliver in to their own morally compromised and dark places. So I don’t know that anyone is necessarily going to be there to stop him. Even Thea is struggling with her own bloodlust. The one person that might be helpful to him is Malcolm. What the viewers will see is we’re going to have him give Oliver some very interesting and helpful advice. And obviously we’re going to blow that up. It will bring them a bit closer together, though, which will give us some really juicy stuff when we start to break them back apart.

TVLINE | How bad of shape is Felicity in? How many bullets did she take?
She took a lot. Damien really wanted revenge on Oliver, he wanted to hit him hard and hit him where it hurts. What we saw was brutal and that’s what happened to her. It’s very brutal.

TVLINE | The trailer out there hints at complications if Felicity survives, and that of course spawned Oracle theories. And her Season 3 origin episode did for a time have the word “Oracle” in it. Is that on the table, off the table…?
It’s off the table. That’s something we definitely talked about [doing] with her in the beginning and yeah, people have to tune in to see what happens and what happened. But yeah, it will not be Oracle, sadly. 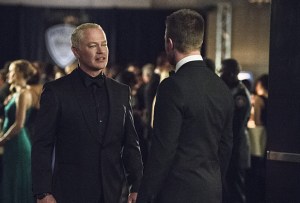 have enough information yet to know exactly what Damien Darhk’s Genesis plan is all about?
No. You don’t. One of the challenges in introducing a Big Bad early is his plan has to be even more elaborate than previous supervillains, and that’s one of the things we love doing this season, teasing out little bits of cool info. So we were really excited by that subterranean [room], because it will come back. It won’t be until the end of the season but you’ll definitely know what that was for.

TVLINE | You gave us a glimpse of his family at Christmastime. How will that inform this Big Bad?
What we always try to do is allow our supervillains to in some way, shape or form be the hero of their own story. Damien Darhk is nothing but evil, but in introducing his family we felt it was an interesting contrast and something that would help give him dimension. It will eventually help us understand what his uber-agenda is, but in the moment what we like about it is the visual contrast of trimming the tree with his family while his men are shooting Felicity. But also, we really wanted to give him human dimension in a way but not in service of humanizing him. His wife, we’ll come to find out, also has her own dark agenda — no pun intended. 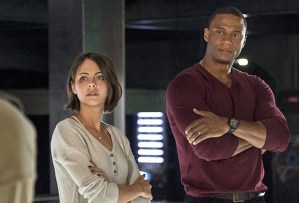 TVLINE | I love that you didn’t just “flip a switch” with Andy and have him be all better and become part of the team. You’ve kept us guessing what’s going on inside his head.
Yes, and Eugene Byrd (Bones) is just a tremendous actor. He’s bringing a lot to that role, so we’re writing to that for sure.

TVLINE | The fact that Damien’s power is neutered by Thea, will that come back into play?
It will definitely be a factor — especially for Oliver. It’s going to present him with some interesting moral questions and challenges.

TVLINE | It seems like her immunity could be used as a weapon against Damien.
Yes, that is definitely an interesting way to go.

TVLINE | Though there was some confusion about whether she was reflecting his power, or blocking it.
In our mind, she was more deflecting it, basically. She is immune to it, because the Pit has given her a certain amount of power. If you want to get scientific about it with fake science, something in her bloodstream allows her to repel his powers — and that’s something that he as a former member of the League [of Assassins] is surprised by.

TVLINE | For what purpose are you bringing back Roy?
Whenever we bring people back – same with Sara — we always have a very specific character reason in mind. We wanted to see Colton [Haynes] again, we wanted to bring Roy back into the fold — at least temporarily. He’s going to have a really cool and emotional story with Oliver and Thea when he comes back.

TVLINE | Speaking of Thea’s love interests, what’s the plan for Parker Young’s Alex?
Obviously he’s got two places on the show, including as Oliver’s campaign manager, so he’ll factor into the Damien Darhk and Oliver story going forward, because Damien is not backing off of [his attacks], you’ll come to find out. But the more interesting piece for us is his relationship with Thea. It’s going to have some ups and downs, but we like their chemistry. He’s her chance at normalcy and we’ll see whether she grabs it. 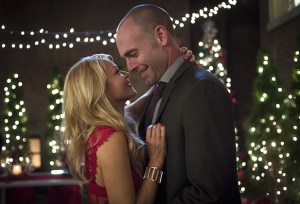 TVLINE | What was the thinking behind bumping up Donna’s presence this season? What has the show gained?
A couple of things. First, the audience and us, we love Charlotte [Ross]. She brings a definite, different energy to the show. And for us, in terms of expanding the world and the goal being creatively to see more of Felicity’s and Dig’s backstories and character and explore them more, she’s crucial to that. She’s someone other than Oliver for Felicity to talk to, and she has a longer view and a deeper understanding of who Felicity is and who she was in the past, and that is extremely helpful when you’re trying to accomplish exactly that in story. She’s a great actor and she brings some fun comedy and different storytelling possibilities with her.

TVLINE | Of course, by pairing her with Lance, you’ve increased the odds of him being the one in the flash-forward grave.
[Laughs] Everyone wants to know! It’s a very good question. We shall see.

TVLINE | The last time we spoke, you said we might get another flash-forward to inform that mystery….
There will be a flash-forward sometime in the next few months, yes. It’s somewhere between [Episodes] 10 and 15, I’ll tell you that.

TVLINE | Megalyn E.K. (The 4400) is heading over as a live-action Vixen. How does she figure into things? Will it be a standalone outing?
It will be a standalone, yes. We really needed someone to come in and give Oliver some help with magic. One of the things we’ve been exploring this season is “How does Oliver deal with magic, specifically with Damien?,” and she comes in for a very high-stakes, amazing episode. She’s done a great job [voicing] the cartoon on CW Seed and she’s a tremendous actor in her own right. We’re really excited.