Nary a back went un-stabbed on The Royals‘ season-ender as the world learned of Simon’s killer, Cyrus’ scheme unraveled and a presumed-dead character was revealed to be… well, not so dead.

Let’s begin with that closing twist, the three words that will haunt us until The Royals returns for Season 3: Robert. Is. Alive.

The final moments of Sunday’s season-ender found the (presumed dead) royal lying on a beach, still dressed in his army uniform — and more importantly, still clinging to life. This show has thrown some doozies our way during the past two seasons, but bringing back Robert? I’d stand and applaud right now if a life spent watching television hadn’t depleted me of all conceivable energy. 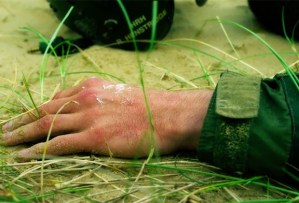 And his return couldn’t be coming at a more perfect time: Not only is Helena planning to use Simon’s DNA to prove that Liam is the rightful heir to the throne, but she also made quick work of Cyrus, teaming up with Prudence to help her and the baby escape his monstrous grip. “You take away my future, I take away yours,” Helena told Cyrus, referring to his order to kill Captain Lacey. “Enjoy cancer.” (Now this is the Helena I fell in love with last season! She’s been taking Cyrus’ beatings for far too long, and I’m thrilled she’s finally coming out on top.)

Then there was the killer reveal — so to speak — as each member of the royal family learned that not only was Ted responsible for Simon’s death, but he also (probably) ordered Robert to be killed. I’m really hoping the angry mob at the King’s Cup didn’t beat him to death, because I’d love to see the look on his face when Robert comes home next season. 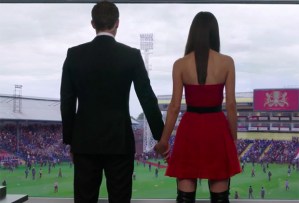 In addition to finally being able to put the king’s murder to rest, the big reveal also reunited Eleanor and Jasper, who were seen holding hands at the King’s Cup attendees unleashed holy hell on Ted. Because nothing says romance like watching your father’s killer get what’s coming to him!

Your reaction to the finale’s (many!) twists? Your hopes for next season? Grade the episode below, then drop all of your thought in a comment.