THE PERFORMANCE | Henry, the Madam Secretary character most often relegated to the role of Elizabeth’s biggest supporter and emotional ballast, spent this week’s episode acting out his fury, frustration and grief over Dmitri’s death. It was a spectacularly bad day for Prof. McCord, relayed via a strong performance from Daly.

Given the McCords’ usual closeness, it was jarring to watch Daly create distance between Henry and his secretary of state spouse, whom he blamed for the death of an operative he’d been handling. Daly plays Henry as a rational man above all, which we saw in the measured way he hugged Elizabeth tightly upon seeing her for the first time after she survived a fatal explosion, then could barely look at her as he quickly postponed a discussion/argument about Dmitri’s fate.

But the best actors are at their most captivating when their characters are pushed past their limits; accordingly, Henry’s blowup at his daughter’s school event — in which he both confessed his anger at his wife and owned his part in the young spy’s death — was incredibly watchable. Daly’s distress at being at the intersection of so many emotions, without resolution in sight, was palpable.

Henry’s relief after finally getting past his anger, right down to the warmth returning to his gaze as he looked at Elizabeth, was just one more reminder of why we love Daly’s portrayal of Madam Secretary’s mister. (Oh yeah, and that DIA resignation scene, complete with the mic-drop exit, was pretty badass, too.) 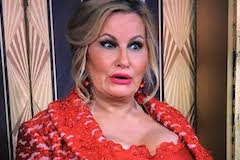 HONORABLE MENTION | 2 Broke Girls is tacky, sophomoric and goofy as hell. But enough about why we love it! Today, we’re singling out Jennifer Coolidge, who’s turned horny discount glamorpuss Sophie into not only the sitcom’s breakout character but a classic on par with Fonzie and Urkel. (Debate as necessary.) By now — the 100th episode aired this week — part of the fun is knowing Sophie well enough that we can anticipate how she’ll react in different situations. So when she arrived at Caroline’s luncheon for her snooty grandmother — with Coolidge exclaiming “Darling!” in a hilariously posh accent instead of Sophie’s usual Polish one — we just about lost it. And by the time the poser forgot her class act and asked to use the john — sorry, the “Jonathan” — we no longer needed a bathroom break, because we’d already peed ourselves. Which, come to think of it, is a compliment that Sophie, if not Coolidge, would surely appreciate. 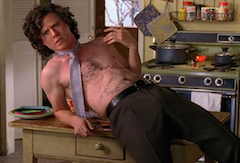 HONORABLE MENTION | Charlie McDermott has always been an underrated hoot as The Middle‘s happy-go-lucky Axl Heck. But in this week’s episode the actor truly established himself as one of TV’s most gifted comic performers. It was obvious it would take some time for Axl to adjust to his first internship, but his reaction to the 9-to-5 work day allowed McDermott to display a knack for physical comedy we weren’t aware he possessed. Whether he was throwing himself over a kitchen counter to convey restlessness, contorting his entire body to flow like a slinky as he fell towards the Hecks’ refrigerator, or committing to an entire scene hunchbacked as Axl complained about a crick in his neck, the fearless McDermott held nothing back. Axl may have a tough time adjusting to the daily work grind, but McDermott more than got the job done.