HBO on Friday unveiled a promo and poster for the late-night series’ third season, in which the host embraces some of his most harsh criticism from Seasons 1 and 2.

You’ll notice that the cruel words come from certain celebrities and political leaders that Oliver has lambasted, including Ecuadorian president Rafael Correa and, of course, Donald Trump. 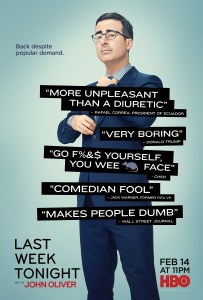 * Boris Kodjoe (The Last Man on Earth) is set to join Code Black in the recurring role of Dr. Will Campbell, a suave but arrogant surgeon who ends up competing with Raza Jaffrey’s Dr. Hudson. He will first appear on the Feb. 3 episode (which would seem to foretell the fate of his Last Man character, who was last seen flatlining in the fall finale).

* Katie Aselton will once again work with The League co-star (and real-life husband) Mark Duplass on the second season of Togetherness, where she will recur in an undisclosed role, Deadline reports.