Grey’s Anatomy fans can breathe a sigh of relief: Cristina was there for Meredith during the most painful time of her life.

Kevin McKidd tells TVLine that Cristina did in fact show up to Derek’s funeral last spring to console her grieving BFF.

The brunette seen standing shoulder-to-shoulder with Mer at Derek’s gravesite (see photo, below)? It may not have been Sandra Oh, but it was definitely Cristina. 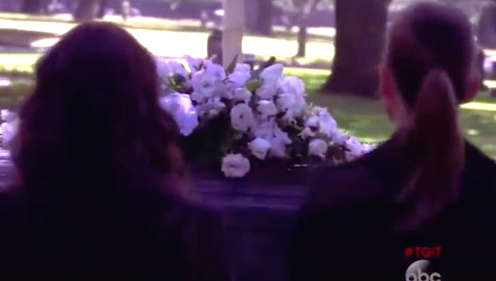 “Cristina was there,” McKidd confirms. “I presume Sandra was busy and unavailable for that episode, which was the only reason why [a body double was used]. That funeral sequence was meant to imply that Cristina was obviously there for Meredith. Her presence was felt.”

Oh concluded her decade-long Grey’s Anatomy run in May 2014, one year before Derek’s tragic death. The actress told TVLine shortly before her departure that she would “love to come back” in a guest-star capacity at some point before the ABC drama signs off for good.