Just because you’re paranoid doesn’t mean an alien drone isn’t about to hunt you down and send you to “The Factory,” a great big prison camp (quite literally) in the sky.

The pilot episode unfolds almost a year into an alien occupation of Earth, and where the Los Angeles neighborhoods in which the show is set are divvied up by a giant metallic wall. There, people’s movements, housing and food are restricted by the “visitors” and every knock at the door, every dropped egg adds to a pervasive sense of dread.

When we meet Holloway’s former FBI agent Will Bowman, he’s getting packed into a icy-cold shipping container and attempting to illegally cross the border into Santa Monica to search for the son from whom he was separated during the occupation. When a resistance cell’s bomb leaves him exposed, he’s given an offer he can’t refuse by the district proxy (House‘s Peter Jacobson, appropriately smarmy): Use his secret skill to track down resistance leader Geronimo and his minions, or get sent to The Factory — along with his wife Katie (Callies) and two remaining kids. 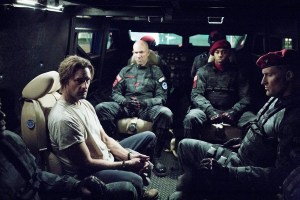 Holloway is great at conveying the tensions of his no-win gig: As he excels at his work, he gets closer to a reunion with his son, but at an incredibly high cost to his fellow earthlings. A close friend’s particularly stinging parting shot in Episode 2 — “Everything’s fine… as long as your kids still have their father” — sends Will crying into his bourbon in the back yard, and it’s hard not to feel sympathy for the guy, if not for his actions.

Callies, whose Katie gets to reopen her saloon as a perk of Will’s new gig, twitches with nervous energy whether she’s bartering for black-market insulin or attempting to score new identities for her on-the-lam friends. Over the course of the show’s opening spate of episodes, her character’s moral quandaries get heavier than the firearm that’s always tucked into the pocket of her handbag.

Without spending tons on FX or giving us face-to-face meetings with the alien overlords, Colony never lets you forget it’s set in an occupied earth. The visitors’ glowing red drones whoosh in at the most inconvenient moments, and who needs explosions when you’ve got actors as stellar as Kathy Baker chillingly recounting how the alien technology wiped out every human defense mechanism in eight hours.

Sure, a couple of subplots — one involving Will and Katie’s teenage son getting involved in a black-market operation, and another hinting at a romance for Katie’s sister (The Mentalist‘s Amanda Righetti) — feel a little extraneous at the moment, but enigmatic glimpses of “Factory” indoctrination promise that Colony won’t run out of ideas anytime soon.

The TVLine Bottom Line: Settle in and enjoy — Colony deserves to occupy a spot on USA Network’s lineup for years to come.