If you’ve been even slightly attuned to pop culture in the last several decades, you’re familiar with the basic concept of Frankenstein.

From The Rocky Horror Picture Show to Penny Dreadful to countless other movies and TV shows, Mary Shelley’s classic tale — much like the titular doctor’s monster — has had its fair share of resurrections.

Fox on Wednesday night added to the pile of adaptations with Second Chance, a drama starring Rob Kazinsky (EastEnders), Tim DeKay (White Collar) and Dilshad Vadsaria (Greek). Before we get your thoughts on the series premiere, a brief recap:

In this modern-day update, the mad doctors are Mary Goodwin (played by Vadsaria) and her brother, Otto (Adhir Kalyan, Rules of Engagement). With the help of her bioengineer twin bro, Mary leads the social media company Lookinglass — but the more pressing matter is her health. She’s battling an aggressive form of cancer, and the only viable treatment — since chemo no longer works — is a transfusion of white blood cells that can cure her. 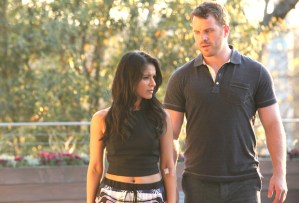 It seems Mary and Otto have been looking for “the one” for quite some time — the right person whose blood cells they can re-engineer to stop Mary’s cancer. That’s why their interest is piqued by the death of Jimmy Pritchard, the neighborhood’s former sheriff. A big fan of drinking and smoking (and hiring prostitutes for a weekly standing appointment — uh, pun not intended), Jimmy was embroiled in a corruption scandal at the sheriff’s office back in the day. Now, it’s his son Duval (played by DeKay), who’s picked up the law-enforcement mantle.

For reasons that will ideally come to light in future episodes, Duval’s own partner has it out for Jimmy, leading him and another sheriff’s officer to murder Jimmy in the middle of the night. (They toss him over the side of a bridge, but it’s staged as a suicide.) When Mary and Otto get wind of Jimmy’s death, Otto decides to take the leap and re-engineer the man’s white blood cells, thus bringing him back to life as a completely new (young, fit, hot) man, whose blood can ideally slow Mary’s sickness.

Over the course of the next 40 minutes, Jimmy 2.0 (Kazinsky) attempts to wrap his mind around this new lease on life, embracing both the good (energetic sex!) and the bad (at the end of each day, he must climb back into a life-preserving tank that allows his proverbial batteries to recharge). All the while, Jimmy remains hell-bent on exposing the men who were really responsible for his death — an endeavor that forces him to cross paths with his own son and daughter, who seem to believe that Jimmy is a long-lost half-brother who resulted from one of their dad’s extramarital affairs. (Still with me? I realize we’re getting into head-spinny territory.)

When all is said and done, Jimmy is able to expose at least a fraction of the corruption afoot, though it seems clear that his work isn’t quite done. On the bright side: It seems like Jimmy and Mary will be hooking up within five episodes, if not sooner. So, there’s that!

OK, your turn. Will you give Second Chance a second… well, you know? Grade the series premiere in our poll below, then hit the comments to back up your choice!