“Using a name like that just for brand recognition — when [the show] has almost nothing to do with Mary Shelley whatsoever — is disingenuous, and it’s a disservice to Mary Shelley,” star Rob Kazinsky says.

The new drama about a 75-year-old, former L.A. County Sheriff (played by guest star Philip Baker Hall) who is resurrected in the body of much younger, stronger man (True Blood‘s Kazinsky) does share a sliver of DNA with Shelley’s iconic work. But that’s where the similarities between the two stories end. After all, last we checked, Frankenstein didn’t team with his FBI agent son Duval (White Collar‘s Tim DeKay) to right wrongs and deliver justice.

Kazinsky says he believes changing the show’s title “was a very wise decision and certainly more honest,” adding that “people don’t want to see a bad version of an established mythology. So here we are, we have our own name and we’re allowed to stand on our own two feet and be judged for the content of our show, and I think it stands up.”

His costar is equally proud of the project. “This show enters worlds that are down in the subbasement and really interesting and provocative and oddly sexy,” DeKay says.

Below, the cast previews Pritchard’s creators and their unique twin relationship. Plus: DeKay weighs in on the comparisons between Duval and White Collar‘s Peter. 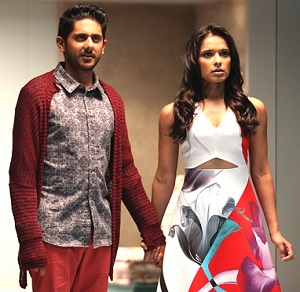 MY MAKER, MY KEEPER | Pritchard is brought back to life by Otto (Rules of Engagement‘s Adhir Kalyan), a tech genius who wants nothing more than to find a way to keep his terminally ill twin sister Mary (Greek‘s Dilshad Vadsaria) alive. Pritchard, it turns out, just may be the key to that mission. A “twice exceptional” young man, as Kalyan labels him, Otto is extremely co-dependent on his sibling, who speaks for him to the outside world. (The duo even has their own lingo, twinspeak, which “is a specific code that [creator Rand Ravich] is using to try and create a language that is unique to them,” Kalyan shares.) But as Mary grows closer to Pritchard, “the very thing that [Otto] hoped would save his sister and allow them to continue to be close is the thing that is, from the inside out, almost destroying their relationship,” Kalyan says.

CAN YOU KEEP A SECRET? | While Pritchard’s son Duval doesn’t recognize his father because “he doesn’t look like him when he was younger,” DeKay explains, the volatile, unpredictable Pritchard isn’t trying very hard to keep his true identity private either. “He’s not a creature of subtly, and his secret doesn’t stay hidden for very long either,” Kazinsky previews, describing his character as more of an act-first-think-later type of guy. “He’s just a wrecking ball, tearing through everything, and whoever finds out whatever, he’ll deal with. He doesn’t really think beyond, ‘How do I hit this person?'” Kazinsky details.

BEHIND THE BADGE | DeKay is well aware of the common links between his new TV role and his previous gig on White Collar. Both shows feature the actor as a G-man, working with an unlikely partner, but his Second Chance alter ego and Pritchard “have a long, long, long past” compared to the bromance between Peter and Neal, DeKay notes. Additionally, the Fox series “has a much different tone. Where White Collar was, let’s say, elegant, this one is bigger and darker and more dramatic in a different way.”

Will you tune in for Second Chance‘s premiere? Sound off below!