Fox’s Second Chance has not a care in the world.

Series star Rob Kazinsky (True Blood), for example, slips carelessly between his character’s American enunciation and his own British accent. Crimes of the week are wrapped up with the haphazardness of toddlers tossing their Fisher-Price people into a toy box after mommy says it’s dinner time. Heck, even the title of the show (fka The Frankenstein Code fka Lookinglass) has proven to be as changeable as it is vague.

There’s a depressing patina of “Eh, why not?” coating every story choice, every performance, even its costume design (Dilshad Vadsaria’s Mary isn’t about to let her post as a Fortune 500 CEO or her untreatable cancer stop her from baring her midriff, dammit)! And the end result feels like a hideous pastiche of focus-group testing, procedural clichés and CliffsNotes literary references that got pulled out of the incubator about two seasons too early. 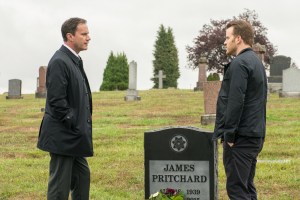 The series opens with disgraced sheriff Jimmy Pritchard (Philip Baker Hall) walking in on a breaking-and-entering job in the home of his FBI agent son Duvall (White Collar‘sTim DeKay). The baddies drive him to a bridge and stage his suicide — but as luck (or plot necessity) would have it, he’s deemed a biological match for an experiment being conducted by Mary’s tech-genius twin brother Otto (Adhir Kalyan), brought back to life in Kazinsky’s hotter, younger and semi-superpowered bod, and used as a high-tech blood donor in an attempt to beat Mary’s cancer. Did I mention Mary and Otto have their own language of more than 3,000 words and that she’s his sole link to the outside world? Or that Duvall has daddy issues — and not just because his younger sister (Amanda Detmer) mentally right-swipes Patrick’s chiseled new torso every time they’re in a room together? (Rated TV-PN… for Please, No.)

Alas, though, Fox’s entry into the 2015-2016 network trend of Special-Powered People Helping Their Reluctant Law-Enforcement Comrades (see CBS’ Limitless, NBC’s Blindspot, ABC’s Quantico… because Priyanka Chopra’s luminous locks are most definitely from another planet) fails as both a high-concept serial and a case-of-the-week diversion.

The show’s writers are clearly interested in a Jimmy-Mary romance, but Kazinsky generates more heat when he’s floating unconscious through his healing tank than he does on dry land with Vadsaria’s (Revenge) utterly bland character, a woman who shows no fatigue from her illness, no exasperation with her manchild brother’s need for attention and not so much as a jolt of fear when she winds up in the middle of an armed standoff involving an innocent child.

As a procedural, Second Chance‘s greatest point of differentiation — that Otto’s all-seeing technology and Jimmy’s mega-strength make even the most implausible twists possible — is more likely to result in rolled eyes than it is in whitened knuckles, especially because no one seems to have the time or inclincation for even the most basic detective work. Episode 2 finds Mary and Jimmy dropping a kidnapping victim at curbside without a single FBI agent asking, “Who the hell are you people?” Other creative choices — like making the baddie of Episode 3 don full face-paint and Samurai sword — put the “dumb” in “random.”

Ultimately, Kazinsky’s opening line — “Second chances can be a real monster” — proves all too apt a commentary for a show that should never have been jolted to life in the first place.

The TVLine Bottom Line: At once patently absurd, painfully sloppy and exceedingly generic, Second Chance isn’t worthy of even a first one.