“Do you think they’re still mad at me?” Charlotte asked Alison at the top of Tuesday’s Pretty Little Liars winter premiere. Wait, did she really think they’d have forgiven her? Is this girl crazy? (Oh, right, I forgot.)

Anyway, Ali somehow managed to convince Rosewood’s four most traumatized exports — five, if you include Mona — to return home after half a decade to vouch for her sister’s release. Unfortunately for Ali, logic reared its inconvenient head when it came time for Aria to speak. Still suffering debilitating flashbacks from the years of torture she endured, Aria urged the judge, “I don’t want Charlotte to be released. Ever.”

But this is Rosewood, where the court system is apparently even shoddier than the police department, so the judge waved like a dumb-dumb while the crazy train known as Charlotte DiLaurentis pulled right out of Radley Station. The girls tried to be adults about it, toasting to Charlotte getting her happily-ever-after in the end, but let’s be real: That was the alcohol talking.

Of course, none of that really matters now, because Charlotte’s corpse — yes, as in dead body — was uncovered the next morning outside the church. And she didn’t kill herself, as the police initially suspected; she was murdered!

What you just read were the bones of Tuesday’s premiere. Now, we’re getting to the meat: my deepest, most important thoughts and observations about this Brave New Rosewood in which we’re living…

* “I’m Andy Swift, and I approve of Veronica Hastings running for Senate.”

* Speaking of Spencer’s mom, did all of the parents get hot(ter), or am I still seizing out from that two-minute #Freeform promo at the top of the episode. 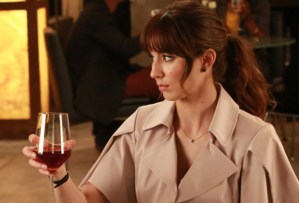 * I don’t know which moment I loved more: the reveal of Radley’s big makeover, or the look on Spencer’s face when she thought those four high-school girls were getting a spooky text. (“It’s the ciiiiircle of liiiiife.”)

* I’m sad that Ezra is so dead inside now, but I have to admit, I’m really excited to see him go Muppet-crazy like in that promo where he screams at the girls.

* Of all the fractured couples on this show right now, I’m putting my money on Spencer and Toby getting back together next. They may have fallen “out of sync,” but something tells me that spending this next half-season together is going to push them right back in.

* And that final Hanna/Caleb scene wins the award for Most Heartbreaking. You could have cut the sexual tension in that hotel room with a knife. (I can’t wait for him to inevitably stop her wedding.)

* Closing remarks: This episode gets an A++ from me. I wasn’t expecting Charlotte’s death in the slightest bit, and giving her a recreation of Ali’s funeral — complete with Sara Harvey as the sort-of new Jenna — was brilliant. In fact, the whole new mystery, especially the fact that I genuinely think Aria could have killed Charlotte, is also brilliant. Bravo, Team PLL. This is how you silence the naysayers.

Let’s talk, PLL Nation: Was this episode worth the wait? Grade it below, then drop a comment with your full review.