THE PERFORMANCE | From the first moment of American Crime’s second season premiere, we could tell that Ms. Taylor’s performance would be something special — and that was before we’d even laid eyes on her. The emotion in her voice as blue-collar mom Anne reported son Taylor’s rape to the 911 dispatcher spoke volumes about not only her character’s love for her boy but also her — and, shortly, our — absolute horror over his assault.

From there, the drama flashed back, revealing how Anne gradually learned what had transpired. At first, she was every parent who’s ever been called into the principal’s office, as Ms. Taylor unleashed her alter ego’s disbelief and anger that her kid had gotten himself suspended from the elite school that she’d worked so hard to get him into. But, when at last Anne got the whole story out of Taylor (Connor Jessup, a shoo-in for a future Performer of the Week), Ms. Taylor’s eyes shone with the pain that the Blaines now shared.

Finally, as Anne realized that Headmaster Graham was an adversary, not an ally — she warned Taylor’s mom against using the R word when his “bad choices” were to blame — Ms. Taylor all but exploded in a fiery display of righteous indignation and incredulity. She was so good, in fact — so earnest, so raw — that we don’t know whether to be hopeful or afraid that the best is yet to come, because it’s sure to be as hard to watch as it will be compelling.

HONORABLE MENTION | Cassidy Freeman gets to do some nice, nuanced work on Longmire, but she was able to share her talent with a far wider audience this week via a memorable turn on the NCIS/ NCIS: New Orleans crossover. As Eva Azarova, a GRU sleeper agent suspected of being on a killing spree, Freeman first showed us the character’s stone-faced, pistol-brandishing side, as the character guarded her secrets. (Freeman also was able to dive into some rollicking action scenes, trading gunfire and body blows when a skirmish broke out.) But once Eva’s true agenda came forth, that’s when the Smallville alum pulled us into the character’s inner conflict, baring her soul during an intense interrogation, and then bidding Abby’s brother Luca adieu with a sweet kiss. 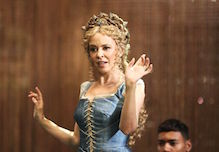 HONORABLE MENTION | All hail “the queen of all queens”! No sooner had Galavant’s hero learned that The Enchanted Forest was a gay bar, not an actual forest, enchanted or otherwise, than out twirled pop goddess Kylie Minogue to steal the musical comedy’s second season premiere. With cheeky abandon, the disco diva objectified the “beefcake happy meal” in song, making “Off With His Shirt” not just an insta-classic but an “It’s Raining Men” for a new age. (If we may, a secondary honorable mention to Glenn Slater, whose mischievous lyrics left us giggling like the immature schoolkids that at heart we still are.)

HONORABLE MENTION | Nine times out of 10, Scorpion‘s Happy does not live up to  her namesake. That’s why we were pleasantly surprised (and moved) by Jadyn Wong’s performance last Monday, in which the guarded Happy showcased a few moments of long-awaited vulnerability. After barely surviving an Arctic blizzard just hours before — scenes that allowed Wong to put Happy’s fear and loneliness on display — Happy let her guard down in front of her father, admitting that she’s not the carefree personality that her parents are. Although the conversation was quiet and understated on Wong’s part, the actress still communicated the gravity of the moment. It’s not often that we see this side of Wong’s character, but her performance had us clamoring for more.