The Blacklist creator Jon Bokenkamp has a few crucial words of advice for viewers as the show resumes its third season: Don’t assume that Elizabeth Keen is going to make it out alive.

Liz, as you might recall, was finally captured by Ressler and the task force in November’s fall finale — an outcome she’d been dreading, as it puts her life in serious danger with both the FBI and The Cabal.

“There are very few rules that we are afraid of breaking,” Bokenkamp tells TVLine, when asked if Liz is really in the mortal danger she’s been fearing. “Alan Alda is somebody who we loved having on the show, and it broke my heart that we blew him up in the box, but it felt like that’s where the story had to go. We’re certainly not afraid of taking some really big swings.” 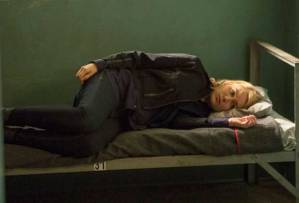 Regardless of whether Liz actually survives her latest ordeal, Bokenkamp teases that the remaining Season 3 episodes (which begin tonight at 9/8c on NBC) will be “very precarious” for her and Red alike.

“[Red] has a plan that is not in place, and things are happening faster than he had anticipated,” he shares. “The whole crew is in a very uncomfortable situation.”

Speaking of tricky situations, Bokenkamp confirms that the Blacklist producers have come to a decision on how to handle Megan Boone’s pregnancy — but that’s about all he’ll share.

“It’s difficult because Megan works incredibly hard,” he says. “She’s in almost every scene of the show, and the decision to include it or not was something we took quite seriously. I’m not going to tell you what we decided, but we have figured out what to do.”

The Blacklist fans, how do you think the rest of Season 3 will shake out? Hit the comments with your hopes!