A Firefly reunion is taking flight on Castle.

Summer Glau has signed on to guest-star opposite her onetime Serenity captain Nathan Fillion in a spring episode of the ABC drama, TVLine has learned exclusively.

Glau will play Kendall Frost, a provocative private detective in Los Angeles who who competes with — you guessed it — Castle to solve a deadly mystery. She will appear in this season’s 14th episode. 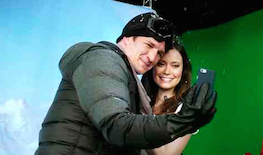 The actress is hardly the first Firefly vet to visit Fillion’s current stomping ground. Adam Baldwin and Gina Torres have also popped up on the show, with the former appearing for the second time this past fall.