“I always wanted to be a good cop — but there’s no straight line to that,” a banged-up, shaken Det. Harlee Santos confesses into her laptop in the opening scene of Shades of Blue.

There does, however, seem to be a decidedly direct line between the beats of NBC’s new Jennifer Lopez vehicle (which premiered Thursday night) and pretty much every movie and TV show ever written about morally murky police officers. 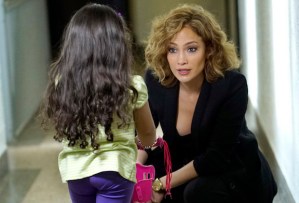 Lopez’s Harlee is the kind of law enforcer who stops short of knocking on a drug suspect’s door so she can tenderly usher a stray toddler back to her apartment, then seconds later covers up her rookie partner’s shooting of said dealer — despite the fact that the perp was armed with only a video-game console. She’ll use police-protection hush money collected from criminals to fund her teenage daughter’s private school dreams, but flinch at the idea of borrowing $10,000 from the father-figure boss (Ray Liotta) who supervises both her legit work and extracurricular activities.

Shades of Blue may not be exceedingly original, but it’s zippily paced. After Harlee’s “the ends haven’t justified the means” confessional, the timeline jumps a mere two weeks back — to the unjustified shooting, to a quick and iffy Internal Affairs investigation and then — to Harlee’s shock — an undercover FBI bust that leaves her with a choice of jail time (and abandoning her daughter) or a new gig as a wiretap-wearing informant who’ll deal with a solitary (and kinda stalker-y) handler in abandoned warehouses and concrete underpasses.

Harlee’s priorities are utterly askew — “You have no idea what it takes to be a good cop!” she hisses when she’s finally caught red-handed (oh, lady, neither do you!) — but it turns out Liotta’s Wozniak might be more bent than she suspects. In a subplot of the pilot, Wozniak tracks down the partner of the fallen dealer and instead of putting him behind bars, turns him over to his spurned rivals for a sure-to-be hideous death — muttering that it’s “for the greater good.” (Dude was selling a botched kind of heroin.) But the big cheese is also plotting some unspoken, possibly dangerous side deal with an Internal Affairs cop — and hoping to bring in his protégé Harlee for the big score. 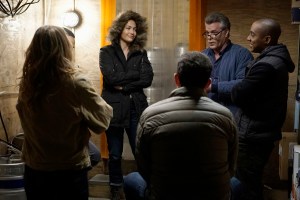 Lopez and Liotta are rock solid in their respective roles — finally, a glimmer of the actress so exceptional in Out of Sight! — but the suspense they build is intermittently blunted by moments both ludicrous (Harlee’s handler jeopardizes the entire operation by plunking down behind her and Wozniak at her daughter’s cello recital) and clichéd (Wozniak’s ferocious “there’s a rat in my crew!” speech ends exactly as you expect — by telling Harlee she’s the only one he trusts). It doesn’t help that Shades of Blue‘s supporting characters are (at least in Hour One) as generic as dollar-store plastic bags (poor Drea de Matteo!).

That said, when the series plays with the casualness of Harlee’s lies and their often excruciating consequences — Lopez is especially sympathetic crashing her daughter’s car into a median to shore up one of her fibs to Wozniak — there’s a glimmer of hope that a potentially interesting character study lies beneath the husk of crooked-cop tropes that are all too familiar.

But enough from me! What did you think of Shades of Blue? Grade the pilot in our poll below, then expand on your thoughts in the comments!