The following photos from HBO’s Confirmation do feature Kerry Washington and they are set in Washington, D.C. — but the similarities to Scandal end there.

The upcoming TV-movie focuses on the 1991 confirmation hearings of Supreme Court Justice Clarence Thomas, who came under fire when onetime adviser Anita Hill (played by Washington) accused Thomas of sexually harassing her.

The snapshots below offer a new glimpse at Washington in character, as well as Wendell Pierce (Treme) as Thomas and Greg Kinnear (Little Miss Sunshine) as then-Senator Joe Biden, who oversaw the hearings.

Holding court at the Television Critics Association winter press tour in Pasadena, Washington on Thursday spoke about the modern-day relevance of Confirmation as it tackles relevant topics.

“One of the most important things that happened as a result of the hearings was that it changed the global conversation,” she said. “That is an outcome that we all felt was really important, and we wanted to make sure that conversation continues.

“Some of the issues have evolved,” she continued, “and yet some of the issues are still rearing their head, in terms of gender and race and how we understand those things… That significance was not lost on me.”

Confirmation airs on HBO in April. In the meantime, scroll through the photo gallery below for a first look at the project. 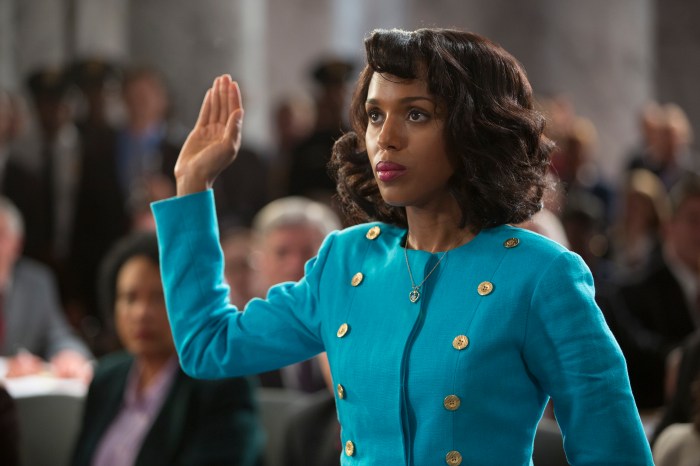