American Crime returned for its second go-round on Wednesday night, this time with a different setting, a fresh storyline and a few new faces in the cast.

One thing that hasn’t changed? The issues at the center of American Crime Season 2 remain every bit as harrowing, complicated and uncomfortable. Whereas Season 1 focused on racial profiling and religious prejudice (among other things), the anthology series is now turning its attention to sexual assault and socioeconomic disparity. 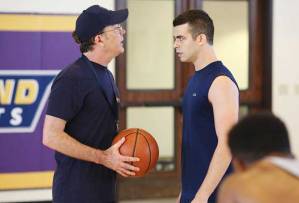 Taylor — already an outcast at his hoity-toity high school because he isn’t wealthy — becomes the center of attention at Leland High when incriminating photos of him at a house party make the rounds. Like, passed-out-with-vomit-on-his-shirt levels of incriminating. At first, it seems Taylor is just an oddball who got too drunk over the weekend — but the viral photos quickly turn into something much, much more serious.

After Taylor’s mom (played by returning cast member Lili Taylor) discovers the photos and grills her son about his behavior, he finally confesses that he only chugged those beers because the basketball players hosting the party were egging him on to “be fun for once.” And although Taylor never flat-out says he was sexually assaulted, he tearfully admits to his mom, “I think they did something to me,” leading Anne to believe her son was raped by those basketball bros.

Chances are you’ve seen the recent promos for American Crime, in which Anne insists, “My son was raped!” to which Huffman’s Headmaster Graham replies, “You’ve gotta be very careful with that word.” That five-second interaction is a pretty good snapshot of the events that unfold after Taylor tells his mom how the party really went down. Anne makes a statement to the Leland High administration about what Taylor told her, but it isn’t enough to get any of the basketball players properly punished. (It doesn’t help that the team is essentially worshipped by half of the Midwest, and Coach Sullivan, played by Hutton, is the object of the entire school’s affections.)

Panicked and frustrated by the school’s lack of action, Anne decides to take matters into her own hands — despite Headmaster Graham’s warnings — and ends the episode with a call to 911, asking to report a rape.

What did you think of American Crime‘s return? Grade the premiere in our poll below, then hit the comments to back up your choice!