This Monday on CBS’ Supergirl, Kara fought a fight on three fronts: trying to rescue Hank, struggling not to Biff! Pow! the bejesus out of Maxwell Lord, and scrambling to subvert Cat Grant’s suspicions.

Picking up where the fall finale left off, Supergirl’s clash with Astra’s husband was pretty much a Non-frontation, cut short when they both crashed to the ground and the Kryptonian lieutenant elected to abduct Hank Henshaw.

With Hank gone, Alex was appointed interim DEO director — though she was promptly usurped by General Lane and the army, who went to extreme lengths to extract the location of the Rozz escapees’ base from Astra, via some brutal Kryptonite serum. But as it turns out, Astra leads the army into a trap, a shipping container that hid a bomb behind a hologram of Hank. And Kara was only able to save Alex and one soldier.

Meanwhile at CatCo, Kara did her best to appear “really, really normal,” but Cat saw through her charade, insisting that her mild-mannered assistant and Supergirl are in fact one and the same. When Kara persisted in refuting the dual identity, Cat delivered an ultimatum: prove to me you aren’t Supergirl, or pack up your desk. Because as Cat sees it, Supergirl should be a full-time job, saving lives vs. shlepping lattes.

With Astra forever dangling the “truth” about her mother in front of her and her future at CatCo in question, Kara also learns that James got pummeled for snooping around Maxwell Lord’s HQ — and both he and Winn beseech her not to exact revenge while angry. (If Kara is no different from Non and his ilk, Winn argues, “We lose.”) Met with this crisis of faith, Kara laments to both fellas that she has never felt so powerless, that she has lost everything — even the untainted memory of her own mom. But James reassures her, “Even when things look bleakest, heroes find a way.”

Kara visits Astra in captivity, wanting the truth once and for all — and her aunt reveals that before Alura banished her to Fort Rozz, she affirmed her plan to pursue Astra’s agenda but in a peaceful way, using reason and compassion. The secret, Astra reveals, is that Alura believed in her to the very end. With that said, Kara takes control of the situation and marches Astra past a cheesed-off General Lane to make the trade. And though Non has the place surrounded by his hovering buddies right after the swap, Astra orders them all to stand down — though, she assures Kara, this is no truce. Yet.

Back at the DEO, Kara asks Hank about something Alex said during the near-melee, suggesting that he “transform.” Hank comes clean about his Martian origins, while Alex reiterates how important it is to have J’onn atop the DEO command, as General Lane just proved. 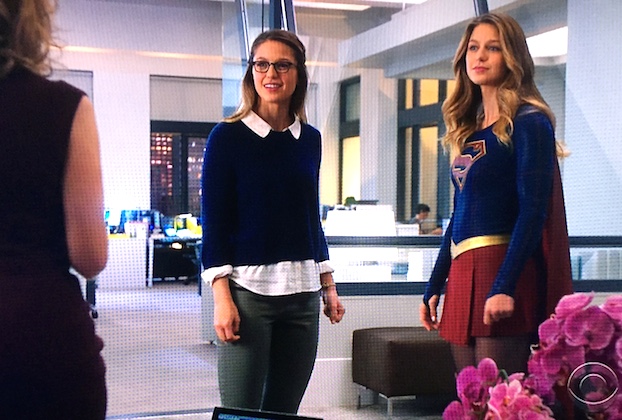 Besides, J’onn’s shapeshifting comes in handy — such as when doubling as Kara to prove to Cat that she and Supergirl are not the same. Then again, Cat scoffs afterward, the two don’t look anything alike, she realized.

With that bullet dodged, Kara fires off a couple of IMs to cousin Clark (who of course echoes the episode’s “blood bonds us all” theme) and then vows to James and Winn that they will find out what Maxwell Lord is up to. But first, we get a tiny glimpse into the tech titan’s plan, when an underling reports that they found a woman who meets “all the requirements,” having no family ties. Maxwell checks in on the “Jane Doe,” who bears a resemblance to Kara… save for some bizarre, ink-black eyes…

Want scoop on Supergirl, or for any other show? Email insideline@tvline.com and your question may be answered via Matt’s Inside Line.