ABC’s Galavant returned on Sunday night with “a real earworm” in his heart and a new mission at hand. Is the double-pumping midseason musical-comedy still hitting the right notes?

Whereas Season 1 opened with Galavant, Princess Isabella and Sid journeying to Valenica, where King Richard had made Madalena his queen, Season 2 follows the hero and deposed Richard as they leave behind their “smelly,” shipwrecked pirate pals to 1) save Isabella from imprisonment/arranged marriage to her 11-year-old cousin, Hortensia’s Prince Harry, and 2) reunite with at least Gareth — though the prospect of even that is soured by Richard’s discovery that his No. 1 has replaced him as Madalena’s king.

The premiere episode, titled “A New Season aka Suck It, Cancellation Bear,” opened with, no, not the “earworm” that is Galavant’s personal theme song, but a rousing, musical toast to a “new season” of “this year’s least expected big event,” one that “you’ll probably record.” With a nod to time slot competition old, new and perceived, the song invited you to “skip those football matches and globes made of gold,” to “screw all those apprentices and every bachelorette.”

We then get caught up on life in Valencia, where Gareth is grumbling about his title as The Guy Who Was With the Queen When She Killed the Other Guy Who Was Trying to Be King. With Sid’s help making sense of the kingdom’s charter, Gareth argues to be made king, and Madalena acquiesces — though she stops well short of allowing him to be announced first.

Galavant and Richard meanwhile find themselves in The Enchanted Forest, which is ruled by an evil queen — that is, a men-only pub lorded over by [dreamy sigh] pop star Kylie Minogue. When Galavant, that “beefcake Happy Meal,” proves to be a real rainmaker with Bear and the rest, the queen forces him and his traveling companion to stay put — though eventually Richard’s “Uncle” Keith helps the men escape. 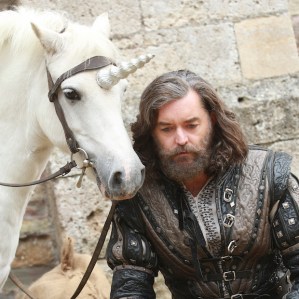 revolves around Galavant and Richard’s stop at a village, where they waited out the latter’s boot repair by visiting Edwin the Magnificent, a fortune-teller who happens to have handy a gizmo for communicating between realms. The good news? The amulet that Isabella apparently/allegedly almost always wears (but really, never has) acts as a receiver. The bad news? Back in days of old, the signal was scattershot at best, leading to a miscommunication in which Gal calls Izzie a “gross” “brown cow” and seemingly urges her to “marry Harry.”

Although Galavant believes his rescue mission to still be in play, the outlook for the star-crossed lovebirds ever improving on that “slightly yeasty,” “oddly musty” Awful First Kiss seems slight, with Isabella’s wedding approaching in a matter of weeks.

Madalena and Gareth meanwhile came to verbal/musical blows when the latter starts moving his “Dogs Jousting” painting and other personal belongings into the throne room, but one musical number later, they agree to disagree.

For Richard, things start to look up when a unicorn’s nagging about his purity of body gives him new resolve to be the leader he was meant to be. The fact that he has unwittingly laid claim to The Hero Sword (to be “drawn by the one true king”) seems to be but icing on the cake. The only wrinkle in his plan: his castle has gone missing, when he and Gal arrive at what should be its entrance!

Notable quotables, of many:
* “He was a tall drink of water and I will keep him forever in my spank bank.”
* Enchanted Forest regular Sir Jean Hamm’s boy toy was named Bobby. (Think about it, Mad Men fans….)
* “He’s going to make a wonderful husband, your cousin — once he stops peeing himself.”
* “One daughter! And then we leave the rest for the White Walkers.”
* “Dad said you went to The Enchanted Forest and never came out.” “The other way around, kid.”
* “You never handed me the [bleep]ing amulet!”
* “He called us friends!”
* “He makes you look like an ass… ass… ass… astronomical leader by comparison.”
* “Yowzers. Blunt.”

What did you think of Galavant‘s return?