Initially written off as a winter hiatus-filling lark, ABC’s Galavant with its first season surprised and delighted many, marrying broad comedy and manic musical numbers in a manner akin to Robin Hood: Men in Tights or The Life of Brian.

So positive was the reception that the tongue-in-cheek fantasy saga is back this Sunday at 8/7c for five weeks’ worth of back-to-back episodes, picking up with half-baked hero Galavant (played by Joshua Sasse) and unseated King Richard (Timothy Omundson) allying to get back the girl (imprisoned Princess Isabella, played by Karen David) and the crown, respectively. Meanwhile, Madelena (Mallory Jansen) and Gareth (Vinnie Jones) labor to lord over Valencia — provided that Sid (Luke Youngblood) can help a certain someone get over his nasty night terrors.

TVLINE | What was the edict going into Season 2? What was the charge?
The cliffhanger last year kind of split everybody apart, so our big question was: How do we bring everybody back together again while also kind of incorporating what we’ve learned from Season 1? The big thing we learned is the show seemed to work best when we had a journey element to it, giving an engine to the show. So what we tried to figure out is how do we keep what we love about the show and keep a sense of momentum going through the whole thing, while keeping the same number of songs and the same kind of ridiculousness going as well.

TVLINE | I was curious about that, if we’re hearing the same balance of songs.
We are; what we found is a sweet spot for us is three [songs per half-hour]. It’s doable for Alan [Menken] and Glenn [Slater], because it’s a lot of new music, but also for production. We have seven shooting days and a musical number takes about a day to shoot, 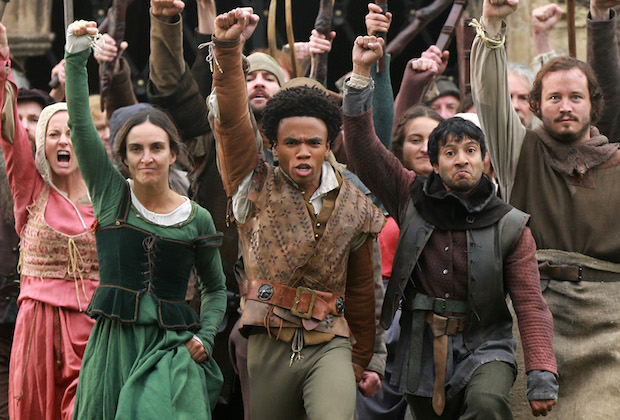 so if you start to get four in there, even reprises of the same song… we’re killing our directors.

TVLINE | Do you have a favorite this season?
I do. There’s a song in Episode 7 that Eddie Marsan (Ray Donovan) sings…. I don’t want to give away too much, but it’s a song about death and I think it’s one of the best things we’ve done.

TVLINE | The season premiere’s opening number is a hoot, too, because it’s soooo wonderfully meta.
When we got together at the beginning of the season, we gathered as many story ideas as we could from the writers and from Alan and Glenn and Dan [Fogelman], and then Kat [Likkel] and Dan and I had a conversation about what could the show be. The feeling while we all sat in that room was everything that was captured in that first song. “Can you believe we got another season?! This is so exciting!”

TVLINE | You get in digs at The Apprentice, the Golden Globes….
There were conversations about how [in Season 1] we were up against The Apprentice and football and all this stuff, so let’s just embrace it, that there’s this incredible miracle that we get to do this show that is so special to everyone involved. The fact that we get to do it again is crazy.

TVLINE | How would you describe the Galavant/Richard dynamic as they become unlikely co-adventurers?
It’s like a buddy road comedy. What we wanted to do is show some growth in every character but especially between those two. It was really important for us to not just have Galavant rolling his eyes at this doofus king the whole time. At a certain point, they’re going to come to an understanding where Galavant realizes that Richard has been there for him the whole time, where these two people realize they need each other.

TVLINE | But to start, it seems Richard enjoys the camaraderie a lot more.
He loves it. He’s desperate for a best friend. He’s actually desperate for anything. In our minds, Richard was always told he was great as king yet deep down he knew he was kind of a fool. That’s what he’s now realizing, but he feels like he’s destined for great things. A friend who knows [Vince Gilligan] told us that the way he described Breaking Bad was he’s going to “take Mr. Rogers and turn him into Scarface.” We started thinking that’s a really cool trajectory, taking somebody from one place and flipping them, so we tried to do that this season with every character, really. 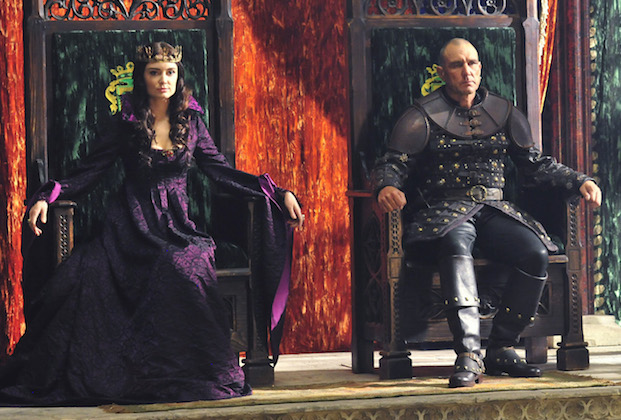 We stripped away everything from Richard and now are building him back up, taking the boob and turning him into the hero.

TVLINE | You spoke about splitting characters up. I have to say that at the end of the finale, I was “curious” to see Richard with Galavant, but I questioned how vested I might be in Madalena and Gareth at the Valencia castle. How do you plan to keep us engaged in that part of the story?
We sort of saw that story as a relationship that was a one-night stand where they impulsively just say, “We’re going to be king and queen.” And the next step of that is, like, well, now one of them is kind of moving in. Gareth is moving his stuff into the throne room and she doesn’t like that, so they’re trying to find some kind of peace. As they go through that, we’re trying to do was Mad About You with the two most evil people you could find.

TVLINE | What is going on with Sid, meanwhile?
Sid is going to have a Han Solo moment and become the hero. He and Gareth also become unexpected friends. Seeing [Luke Youngblood and Vinnie Jones] together actually became really fun to watch. There’s something about that comic team of a really big guy and a little guy.

TVLINE | You had a sleeper hit 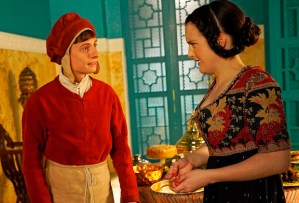 in the Chef character. How will you use him in Season 2?
Well, Chef and Gwynne are now over in Hortensia [where Isabella is being held captive by her young cousin/fiancé, Prince Harry]. Unfortunately, we couldn’t keep Chef just because [The Bastard Executioner’s Darren Evans and Downton Abbey’s Sophie McShera] have gotten so much work now. We had them through, I think, the first four episodes, and then we weren’t going to be able to get them back until the last two.

TVLINE | When Chef serves as continuity police in Episode 2, regarding a giant amulet Isabella supposedly always wears, I was howling.
That came from this idea that we wanted this thing that needed to be big enough to use for a “Skype call” [with Galavant]. In an intentional way, you can kind of see the writing behind the show…. We wanted to really point out the fact that there’s no way she’d be wearing this thing all the time. It won’t surprise you that that run in the script went on for a page-and-a-half. We had to cut a lot of it out for time, but it was so funny.

TVLINE | What would you say is the most bawdy moment of the season?
The most bawdy moment of the season is the thing that ABC wouldn’t let us air. It was a song that Alan and Glenn wrote called “Your Mother Is a Whore,” which is the funniest thing I’ve ever heard in my life. The idea was that for Gareth’s birthday, Madalena wants to throw him a party but she can only do stuff that a fancy king would want — and all Gareth wants is to go to a bar and get in a fist fight, because that’s what he does. So they go to a bar and Madalena is like, “So, now what do you do?” He’s like, “You insult someone, you call their mother a whore and then away you go.” But now when he insults someone as king, when he says their mother is — I think we ended up saying “floosy” or something more kid-friendly — immediately they’re like, “Yes, indeed, my king! She’s the biggest floosy in all the land!” Alan and Glenn saw that in the script and turned it into a song. We’re going to be at [the San Francisco] SketchFest next week and we’re going to play Alan and Glenn’s demo.

But as far as the bawdiest thing we kept…. We have a really great song with Sheridan Smith (Mrs. Biggs) where she’s the anti-princess. That’s pretty cool. 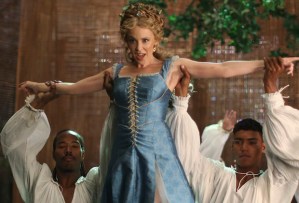 guest stars can we look forward to?
We ended up casting some incredible UK talent that I’m not sure if all of America will be familiar with, but you’ll probably recognize them. [Aussie pop star] Kylie Minogue is in the first episode [playing a gay bar’s chanteuse], we have John Stamos making a quick cameo [as Sir John Hamm], Hugh Bonneville is back [as a pirate captain], we have Simon Callow (A Room With a View) as a psychic, Nick Frost (Shaun of the Dead) plays a giant…. Robert Lindsay (G.B.H.) is a big deal over in the UK….

TVLINE | Well, now you’re just pandering to international sales.
We’re trying to get sold in England! Pretty much everybody that had more than five lines was someone pretty well-known in the UK for comedy or drama.

Want more scoop on Galavant, or for any other show? Email insideline@tvline.com and your question may be answered via Matt’s Inside Line.