There’s a point during the DC’s Legends of Tomorrow premiere (airing Thursday, Jan. 21 at 8/7c) where you may wish the sizzle reel from The CW’s May Upfronts had simply served as the set-up.

As established in that quasi-trailer over the course of 90 efficient seconds but drawn out in the actual pilot across several scenes, Rip Hunter (Doctor Who‘s Arthur Darvill) — a member of the time-hopping Time Masters — travels back to January 2016 to assemble a team of oneday “legends,” in hopes of thwarting immortal mad man Vandal Savage (Casper Crump).

In actual practice, Hunter’s invitation necessitates a great deal of discussion and debate. Can one half of Firestorm coax his reluctant partner to join in? Does Ray Palmer have anything to lose by bailing on the present? (And what advice does Green Arrow offer via a quick cameo?) And what could possibly convince ne’er-do-wells Captain Cold and Heat Wave to sign on for such a noble venture?

But once said conversations have been had, after the i’s are dotted and t’s crossed, the times ahead promise to be spread across the ages and a whole lotta fun.

The first two episodes touch on the show’s rules of time travel as well as give a sense of from where the weekly drama will come. Simply said, the Legends most often will either be following a lead that might allow them to intercept Savage at a time prior to 2166 (when he conquers and runs roughshod over the globe), or scrambling to undo a ripple they accidentally caused in the timeline. On that latter front, there is the potential to serve up the 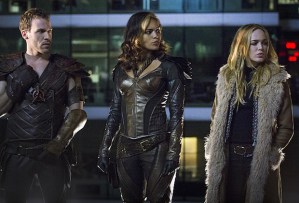 occasional Back to the Future-like folly — as happens in the super-enjoyable second episode, when Professor Stein (Victor Garber) fails to not bump into his younger, groovier self.

Viewers of Legends of Tomorrow‘s CW sires should be quite familiar with the main characters, though this deeper dive into their personalities paves the way for entertaining surprises. On The Flash, Wentworth Miller’s Leonard Snart consumes a steady diet of scenery; here, he gets to be more of a rascal. Similarly, Dominic Purcell’s Mick Rory evolves from a man of few words (and much flame) into a champion of the crazy. And whereas Ray Palmer on Arrow mainly served as a somewhat inert love interest, here Brandon Routh delivers an amusing mix of geeky swagger. Ray also enjoys greater command of his Atom-ic abilities, yet is still capable of the occasional “Whoops!”

Previously explored in drips and drabs across several Flash appearances, Professor Stein as a Legend is fleshed out and full of surprises; hopefully he will continue to be used as a walking historical encyclopedia (a role he crucially fills upon visiting the ’70s). Alas, the other half of Firestorm, Jax Jackson (Franz Drameh), as well as Hawkman and Hawkgirl (Falk Hentschel and Ciara Renée), head into this as relative unknowns and thus have the task of earning viewer engagement.

Brand-new to the CW scene 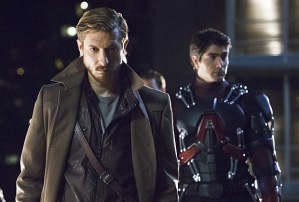 is Darvill’s Rip Hunter, who through much of the opening hours is saddled with gobs of exposition and the role of Exasperated Project Manager, as team members one by one run afoul of the “rules” he has laid out. An eventual twist or two, however, give the charmer some needed texture. Big Bad Savage is… well, a savage, here to say and do eeeevil things and little more.

That leaves Sara Lance, who as played by Arrow vet Caity Lotz enjoys the greatest — and most fun — resurgence, nudged as she has been by someone back home to seize this chance to be a “hero in the light,” as White Canary. Sara, along with Snart and Rory, is always game for a good time as they travel through times, a point made gloriously clear as the trio dive headfirst into an epic bar brawl that you’ll surely rewatch at least once.

The visual effects are on par with Arrow and The Flash. Rip’s ship, the Waverider, carves through the sky a la the Millennium Falcon and phases in and out of cloaking mode with a fun crackle, while a (British) “Gideon” AI serves as a quippy copilot. The group fight scenes, however, almost dare to be made sense of, populated as they are by guns and people simultaneously firing heat, cold, atomic pulses and lasers back and forth across the screen; that Savage is not brutally maimed during any such melee is no small miracle. Also, for all the payload that Captain Cold frequently unleashes, I don’t think we ever see anything actually end up frozen — except perhaps the CGI budget cap?

THE TVLINE BOTTOM LINE: DC’s Legends of Tomorrow promises good times as its unlikely team travels through time — though it will require a superhuman effort to battle Big Bang, Grey’s and American Idol‘s final season.