Perhaps the new mystery is tied to the fact that the population has remain unchanged in 25 years?

Showtime has unveiled the first teaser for its upcoming Twin Peaks revival (due in 2017) and it has that old familiar feeling. The theme music is the same. The font is the same. The location is the same. Deputy Hawk is the same (once again played by Michael Hoarse). And, yes, the population apparently is the same, too (stuck at a still quaint 51,201).

The clip, which is short on actual spoilers, mostly features shots of the Pacific Northwest (aka Twin Peaks‘ home) with Hoarse providing the commentary. “Location sometimes becomes a character,” he muses. “There are a lot of holy places up here… sacred places. It touches something in the psyche. It’s almost like being in a moving painting.”

The video then cuts to the unveiling of the iconic “Welcome to Twin Peaks” sign, followed by a quick, creepy shot of a gray-haired man acting a little crazy (screen shot below — Is it Leland?! David Lynch himself?!). 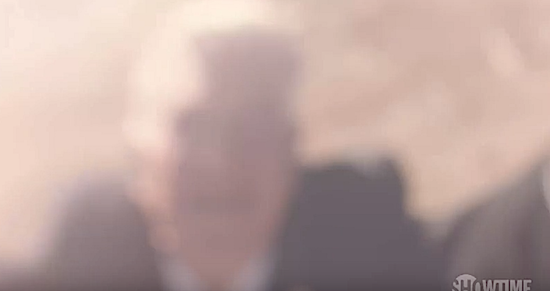 Press PLAY above and then hit the comments with your thoughts and theories?!