On paper, tonight’s Season 9 finale of The Voice is a four horse race — but the week’s iTunes rankings tell a tale of two ponies pulling away from the pack, and the photo-finish cameras bracing for a head-bob at the finish line.

All season long, Jordan Smith has shown Secretariat-like dominance in the downloads department — a trend that held true this week, with the Kentucky native’s solo efforts landing at Nos. 1 and 3 on the iTunes Top 200 singles chart. (Duets with coaches are eligible for download, but do not count as votes, according to NBC.) When you factor in the fact that all of the Top 4’s eligible downloads since Nov. 9 will count toward their finale vote totals, it’s hard to fathom the producers’ clear favorite getting beat.

That said, Emily Ann Roberts had a stellar finale, too, with her tunes winding up at Nos. 2 and 13 at the close of voting. (Her duet with Blake Shelton landed at No. 6.) As evidenced by Barrett Baber sneaking into last week’s Top 3 despite ranking eighth out of nine contestants on iTunes, the force is strong with Team Blake — apparently/especially with online and Voice app voters. If the Tennessee teenager ekes out a win, it would hardly be the strangest thing to happen on NBC’s reality singing competition this year (remember when Adam went bald?).

As for Jeffery Austin and Barrett Baber… let’s just say it’s an excellent consolation prize that they managed to perform for 12 million viewers every single week of the live performance telecasts. I know, I know… I’ve been Team Jeffery since #SheFani (ugh) wasn’t even a hashtag, but the numbers don’t lie. 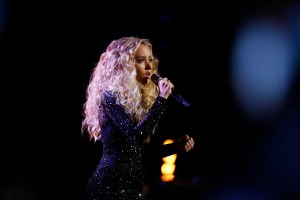 Factoring in the Cumulative iTunes Vote Total and the iTunes Multiplier (which rewards artists with a 10x bonus in votes for cracking the Top 10), we’re predicting the following order of finish:

Who do you think will win Season 9? And who should? Take our polls below, then hit the comments!