The more things change at the Republican presidential debates, the more they stay the same.

Yes, the poll numbers have shifted since the last GOP face-off on Nov. 10 — sorry about that, Ben Carson — but the topics at hand have not.

On the heels of terrorist attacks in Paris, mass shootings in Colorado Springs, Colo. and San Bernadino, Calif. and a bomb threat in the Los Angeles County school district Tuesday morning, the fifth and final 2015 GOP debate focused more than ever on issues of national security, terrorism and — a buzzword of the evening — radical Islam.

Another thing that hasn’t changed about the Republican panels? The candidates’ fondness for talking over one another, slinging insults and fact-checking their rivals on the spot.

Put all those ingredients together, and you’ve got quite the political spectacle — an entertaining, enlightening, watercooler-worthy event that we’ve detailed below. Without further ado, here’s the evening in superlatives:

MOST PUZZLING OPENING REMARKS | Kentucky Sen. Rand Paul posed an important query in the opening seconds of Tuesday’s debate: “The question is, how do we keep America safe?” But instead of answering that question, Paul then cited Donald Trump’s suggestion of “closing” the Internet, then posed another riddle to the American people: “The question is, what does [Trump] mean by that?” What question is the question, Sen. Paul? (Runner-up: Ben Carson, who began his opening remarks with a thoughtful-but-poorly-timed moment of silence for the victims of the San Bernardino shooting.)

MOST DONALD TRUMP-ESQUE RESPONSE FROM DONALD TRUMP | Trump seemed completely unfazed by recent criticism of his proposed ban on Muslims in America. When given the floor for his opening remarks, Trump gave himself a big ol’ pat on the back: “We’ve opened up a very big discussion that needed to be opened up. People like what I say. People respect what I say.” 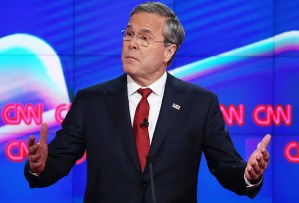 MOST ENTERTAINING TUSSLES | Let’s face it: Watching the Republican candidates spar doesn’t exactly make them look like the most mature group of men (and woman) in the country. But we also can’t deny how fun it was to watch Trump and former Florida Gov. Jeb Bush volley back and forth throughout the evening. First, when Bush accused Trump of being a “chaos candidate,” Trump fired back, “Jeb doesn’t really think I’m unhinged. He’s saying that because he has failed at his campaign. It’s a disaster. Nobody cares.”

Later, when Trump bemoaned how often his name was coming up in other candidates’ responses, Bush asserted, “If you think this is tough — this is a tough business, being the president,” to which Trump immediately fired back (with a healthy dose of side-eye), “Oh, yeah, you’re a tough guy, Jeb. I’m at 42 [percent] and you’re at 3 [percent]. So far, I’m doing OK. You started over here [near the center of the stage], Jeb, and you’re moving further and further. Soon you’re gonna be pushed off the edge.” Me-ow!

LEAST REASSURING RESPONSE | Considering how well New Jersey Gov. Chris Christie handled the Hurricane Sandy crisis — as a Jersey native, I’ll give him that — he seemed the right candidate for this question: Is fear the new normal in America, and how would Christie, as president, curb America’s fears of terrorism and violence? Instead, Christie’s first sentence served as a terrifying reminder of how prevalent mass shootings are in our society: “If a center for the developmentally disabled in San Bernardino is now a target for terrorists, that means everywhere in America is now a target for these terrorists.” Gee, doncha feel better, America?

MOST EFFECTIVE DRINKING-GAME PHRASE | “Carpet bomb.” Once the topic of ISIS came up, and Texas Sen. Ted Cruz was given the floor, those two words might have just gotten you hospitalized if you were knocking back shots each time they were uttered.

MOST UNCOMFORTABLE FOLLOW-UP | When Carson was asked if he’d be ruthless enough to order fatal airstrikes in the war on terrorism, the mild-mannered neurosurgeon compared those difficult decisions to the same ones he makes when operating on children with brain cancer. And that opened the door for co-moderator Hugh Hewitt to ask one deeply unsettling follow-up, eliciting loud boos from the crowd: “You would be comfortable ordering airstrikes to kill hundreds and thousands of children?”

BEST DIG AT THE GOVERNMENT | Just because you’re a politician doesn’t mean you can’t stick it to the man, right? Christie did just that during a lengthy volley between Cruz and Florida Sen. Marco Rubio about the USA Freedom Act, telling the viewing audience, “If your eyes are glazing over like mine are right now, this is what it’s like on the floor of the U.S. Senate.”

LAMEST JAB | Of all the mic-drop moments Ohio Gov. John Kasich could have had regarding Russia’s politics, this was not one of them: “Frankly, it’s time that we punch the Russians in the nose.”

MOST BROMANTIC MOMENT | When Trump was asked to clarify, once and for all, whether he would consider Cruz as his running mate (after calling the Texas senator a “maniac” just months prior), Trump interrupted co-moderator Dana Bash to good-naturedly (and oddly) sing Cruz’s praises. “I’ve gotten to know him over the last three or four days, and he’s got a wonderful temperament,” the ubiquitous businessman said of Cruz, before reaching over to pat Cruz on the arm. “He’s just fine. Don’t worry about it.” After having her question to Trump completely dismissed, Bash said what we were all thinking: “O-kay…”

With that, I hand it to you. Did you watch the final GOP debate of 2015? What were the highlights, in your opinion? Hit the comments and tell us!