All season long, the outcome of The Voice‘s ninth season has seemed as obvious as the ick factor in a love duet between 39-year-old Blake Shelton and his 17-year-old protégé.

You could practically imagine Jan Brady-esque huffing from backstage — “Jordan! Jordan! Jordan!” — every time Jordan Smith got a standing ovation from the judges or a fawning intro package from Mark Burnett & Co. or a No. 1 slot on the iTunes Top 200 from Voice voters both crazed and casual.

But while Jordan slayed his closing Christmas hymn tonight and didn’t make any glaring mistakes — unless, of course, you count the overembellishment on his Sound of Music soundtrack cut — the night was (to my ears) a bit reminiscent of the 1998 Olympic Women’s Figure-Skating Championship, where upstart Tara Lipinski snatched the gold away from favored Michelle Kwan with a dazzling long program.

Yep, my heart (and my votes) will never stray from Jeffery Austin. But after recapping hundreds of Voice episodes, I’m smart enough to understand how performance order, coaches’ comments and editing choices tell the tale. And Emily Ann’s haunting, show-closing rendition of “Burning House” — while not technically perfect — will be the one that garners the bulk of the post-show buzz, and perhaps even the upset victory Blake so deftly referenced.

I could be overthinking things, of course. (Spoiler alert: I’m always overthinking things.) And yeah, I might be a little bitter that my own personal fave couldn’t get all four coaches out of their chairs even after setting the stage ablaze with a soulful flip of a country jam. But on a show where Craig Wayne Boyd can surge past Matt McAndrew, where Kimberly Nichole can finish sixth (it still burns!!!), and where there is apparently a law against more than one female coach occupying the red spinny chairs in a given season, stranger things could happen than Emily Ann trumping Jordan.

While you ponder whether I’m onto something or need to grab a Q-tip for my ears and a Sauv Blanc for my disposition, let’s cut to my letter grades and reviews for this week’s performances: 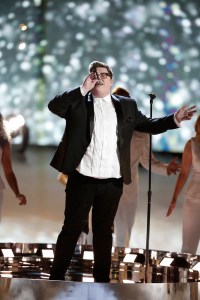 Team Adam: Jordan Smith, “Climb Ev’ry Mountain” — Grade: B | What happened to the dude who burst onto the Voice scene via Sia’s “Chandelier” and Beyoncé’s “Halo”? No disrespect to Julie Andrews’ oeuvre, but on a night where Jordan was also tackling a Christmas hymn, he really could’ve used a balancing note of something current, or at least a tune that would indicate some fleeting interest in seeing his name on the Billboard charts after the New Year. Sure it was mostly in tune, but dude infused the final third with a ton of unnecessary runs — several of which highlighted the screechiest parts of his register.

Team Blake: Emily Ann Roberts, “Blue Christmas” — Grade: C+ | Look, I wouldn’t have been happy having to stand on a giant blue snowflake in a weird lace dress from the Oksana Baiul Collection Circa 2004, but Emily’s glum approach to an old holiday classic lacked even the slightest hint of ache — or anything resembling a palpable emotion. Yeah, I have to give credit for those sweet riffs on the melody in the track’s final 30 seconds, but ultimately, they were just sprinkles on a cake that got left out in the rain.

Team Blake: Barrett Baber (duet with Blake Shelton), “Rhinestone Cowboy” — Grade: B- | As a kid who grew up on a.m. radio in the ’70s, I won’t deny the surge of nostalgia I felt as Barrett and his coach reached the rousing chorus of Glen Campbell’s country crossover hit. Ultimately, though, the tune isn’t much of a vocal showcase, and while Barrett put in a solid effort, I have to admit my attention drifted to the contestant’s awkward shuffle-y dancing during Blake’s solos.

Team Gwen: Jeffery Austin, “O Holy Night” — Grade: C- | In Jeffery’s defense, the random jingle bells and Team Enya backing vocals that percolated through his track’s sparse piano arrangement may have thrown him off the tempo. Then again, how hard is it to figure out the timing on a song as deliberate and familiar as “O Holy Night”? Making matters worse, the red-headed underdog hit more dubious notes during this single number than he in all his prior performances combined. And — poof! — just like that, he’d erased the momentum of last week’s mind-blowing “Make It Rain” during the Twitter Save. [Insert all the sad emojis here.]

Round 2
Team Adam: Jordan Smith (duet with Adam Levine), “God Only Knows” — Grade: B- | Call me crazy, but I’d bet at least the amount of money I’ve spent on Voice contestants’ downloads in the past nine seasons (Grace Askew! Jamie Lono! Rebecca Loebe! #NeverForget) that Jordan’s mic was turned down for the opening verse of this duet. Granted, he and Adam were in complete unison for at least half the number, which made it hard to separate their individual contributions, but then the bridge arrived and somebody bumbled their lyrics or their cue (the camera shot was too wide to figure out what exactly went awry). Even without that slipup, though, Jordan and Adam’s delivery felt a little rote, with the dreamy romanticism of the lyrics getting lost in the shuffle. (In other words, it was better when Matt McAndrew did it back in Season 7). 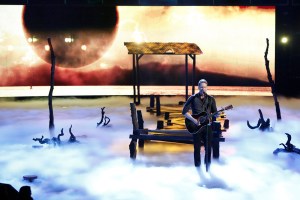 Team Blake: Barrett Baber, “Die a Happy Man” — Grade: B | Aside from the fact that Barrett sounded a little winded by the last verse, this simple, stripped-down love song was hands down the highlight of the country crooner’s performance finale. It probably helped having his wife in the audience, but there’s no denying he’s believable when he’s at his most believable when he’s shouting out his love and appreciation for the woman in his life. If he steers in that direction — and away from the Beer and Trucks genre — maybe there’ll be room for him on the country charts after all?

Team Blake: Emily Ann Roberts (duet with Blake Shelton), “Islands in the Stream” — Grade: B+ | First, a special shoutout to whatever Voice producer tweaked the lyric from “making love with each other” to “’cause we love one another” — turning down the horror level from “I’m hiding under the couch” to “I’m watching this through my fingers.” Despite a song choice portraying her as the love interest to a man who’d be arrested in real life for dating her, however, Emily’s only hint of nervousness was her peculiar leg twitch during the opening verse. After that, the kid’s honeycrisp-apple tone brought some sweetness and light to a fairly somber episode — and I didn’t mind it one bit. 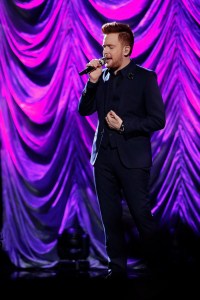 Team Gwen: Jeffery Austin, Sugarland’s “Stay” — Grade: A | Wait — how did the performance of the night get stuck in the middle of the episode? Ohhhh, yes, I forgot… Jeffery got the “It’s an Honor Just to Be Here” treatment — right down to the muted feedback from every coach except for Gwen. (Snap poll: Do the producers dictate to the coaches which performances they’re supposed to love the most — or does it just feel that way?) Whatever the case, Jeffery’s performance as The Other Man begging for his lover to put him first for a change felt raw and vital and desperately real. Granted, the director spent a little too much time focused on that dropped curtain, but the gruff angst Jeffery brought to the bridge combined with his soaring glory notes put an exclamation point on the success story that transformed him from one-chair turn to a potential pop star in the vein of Sam Smith, Adele and Bruno Mars.

Round 3
Team Blake: Barrett Baber, “Silent Night” — Grade: C+ | As an homage to the title of the song, I’m just going to stay silent about Barrett’s baffling, guitared-up, weirdly un-tender reworking of the simplest religious lullaby ever, OK?

Team Gwen: Jeffery Austin (duet with Gwen Stefani), “Leather and Lace” — Grade: A- | OK, so Gwen’s verse was flatter than a crêpe under the tire of an 18-wheeler. But this recap isn’t critiquing the No Doubt front-woman and “What You Waiting For?” genius. Jeffery’s gentle harmonies on the chorus actually buoyed his coach’s own grasp on pitch — and his solo portions of the song were as exquisitely phrased and emotionally potent as anything we heard during the two-hour telecast.

Team Adam: Jordan Smith, “Mary Did You Know” — Grade: A- | I appreciated the deep restraint Jordan brought to the opening verses — which made his amped-up bridge (complete with feather-light falsetto) all the more enthralling. The arrangement — simple strings and a Spanish guitar — was pretty hypnotizing, too, not the kind of accompaniment you’d expect in a religious Christmas tune. By opting not to break out the full band or a complete gospel chorus, Jordan was able to make an intimate connection with the lyrics — perhaps moreso than at any point in the competition. I’m not sure what Pharrell was getting at with his comment about hoping Jordan winds up on a record label that doesn’t try to turn him into something he’s not, but given that he’s tackled everything from Jessie J to Leonard Cohen to Adele to traditional hymns, maybe he’s more versatile than the “Happy” singer would have us believe. 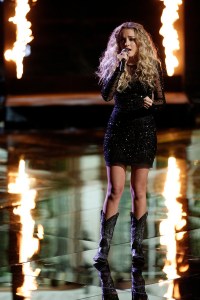 Team Blake: Emily Ann Roberts, “Burning House” — Grade: A- | There was a hint of nervousness in Emily’s demeanor as she belted out the opening bars of this current country hit — and as a result, it felt almost like she was throwing away the ends of phrases on the first verse. Moments later, though, something seemed to click for the Tennessee teenager — a burning desire to win? a deeper connection to the lyrics? a haunting by an older soul? — and her bright, lilting tone went in a darker, more haunting direction as it intertwined with this gorgeous yarn about relationship regrets. The more Emily played around with the melody, the more engrossed I became with what she was cooking up. Whether or not she upsets the Natural Order of Mark Burnett’s Whims, she definitely sent up a flare that she’s ready for country radio.

What did you think of The Voice performance finale? What were your favorite performances this episode? And who should win it all? Take our polls below, then expand on your thoughts in the comments! 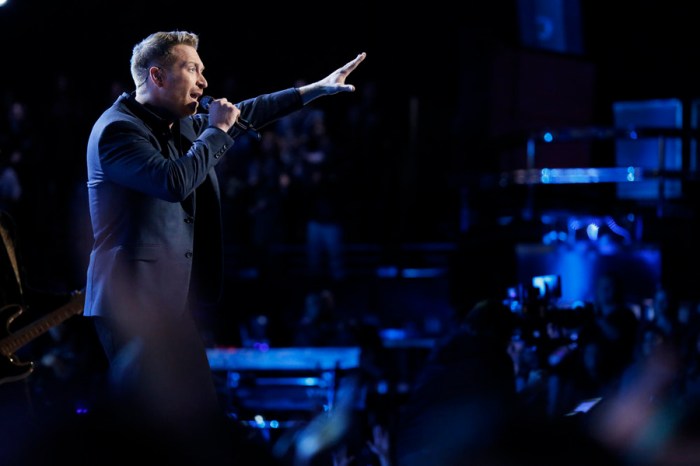