Sam and Amara both prayed to God in Wednesday’s Supernatural fall finale, but only one of them got a response.

The hour begins with Amara on a quest to get a one-on-one with her brother the almighty, but her methods are a little unconventional. She strikes down a bunch of bible-thumpers — “Well?” she declares, looking up — and then visits a church to set up a meeting with the big man. The priest instructs her to pray. When she gets no response, she’s dumbfounded to learn that only the dead get to see God.

“And this makes sense, to billions of you?” she wonders in disbelief. “You only believe what he wants you to believe.”

She kills the churchgoers, once again challenging God to appear. He’s still a no-show. But Dean finds himself drawn to her presence while investigating the murders and ends up going from a crowded city street to an empty field in the blink of an eye. Now that they’re alone, Amara explains that her issues are with her brother, not with his creation. So what is the big spat about with The Darkness and God? According to her, he was fearful that she would make a more perfect creation, so he exiled her. Meanwhile, God “went all Donald Trump, tooting his own horn,” Dean finishes. (Bet you didn’t ever think you’d hear God compared to Donald Trump!)

While God’s rule is all about “his way or the highway,” Amara offers up a world of no pain, just bliss. In return, she wants everything, no biggie. “I was the beginning,” she says. “And I will be the end. I will be all that there is.”

Good pitch, but Dean isn’t buying what she’s selling. He stabs her, to no avail. “I can’t be resisted,” she tells him. At first, it appears like she’s going to consume his soul, but then she kisses him instead. Because they both have The Mark, their meeting “was destiny,” she continues. “You and I will be together. It’s so simple, Dean. We will become one. Why wouldn’t you want that?” (Um, I can think of a few reasons.)

The moment is interrupted as the angels come calling for Amara, threatening to smite her. She takes them out easily and welcomes the light from above as it envelopes her. 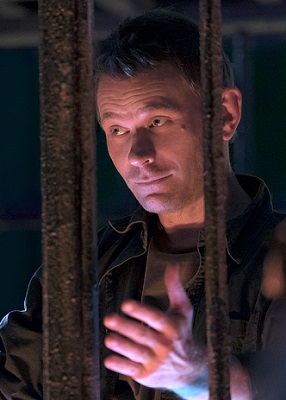 Meanwhile, Sam is convinced Lucifer has the answer to stopping The Darkness. He was there when God ended her, so he must know what to do. Sam enlists Crowley and Rowena to help in getting to Hell. The witch uses the Book of the Damned to ward the cage and protect Sam from Lucifer’s powers.

Lucifer is surprised to discover that God sent Sam visions of him. “Get out of town! Seriously?!” he exclaims.

He goes on to name his price for his help, and it’s a hefty one: he wants a vessel out of Hell. Sam refuses – oh my God, progress! – and declares that there has to be another way, even as Lucifer argues that what the hunter’s done already just to get to Hell is certifiable. Then the warding fails and Sam finds himself suddenly trapped in the cage with Lucifer, who reveals it was him, not God, inside Sam’s head all this time. Aww, bummer! Seriously, God, where you at?

Supernatural fans, what did you think of the episode? Grade it via the poll below, then hit the comments to back up your pick!