Damien Darhk’s master plan came to light in Wednesday’s Arrow fall finale, and it was disturbing as hell.

The episode starts off peacefully enough with a “clean up the bay” event, but things quickly go south when a drone starts shooting at all the volunteers. “There were kids there,” Oliver sighs to Felicity. (I see those fatherly instincts are already starting to kick in.)

Oliver, with the support of the team, publicly outs Damien Darhk’s identity at a press conference, knowing that the baddie will retaliate (and he does at the Queen for Mayor holiday party). Damien sends Oliver flying across the room with a flick of his hand and then takes Felicity, Thea and Dig captive. (Laurel is off fielding hotline calls and gets spared.) 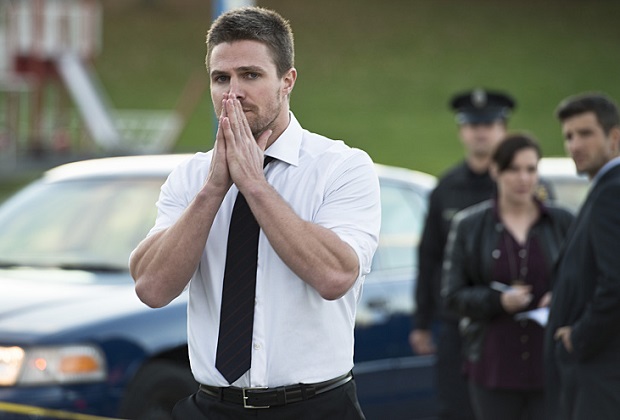 Beating up the ghosts fails to get Oliver any answers about his loved ones’ whereabouts, so he decides to turn himself in in exchange for their safety – with some backup from Laurel, Lance and a concerned-for-Thea Malcolm, who obtains a secure phone belonging to Darhk’s operation. Oliver gets a meeting and then a horrifying demonstration of Damien’s messed up plan, dubbed Genesis. Thanks to the bay clean-up project, Damien reveals that he was able to get a certain type of algae for his gas chamber. He even references Nazis, explaining that sometimes humanity needs a reset.

He gives Oliver and Felicity a moment to talk and then has his men drag her into the gas chamber, alongside Dig and Thea. As long as they’re alive, Oliver has something to fight for, and that’s a problem for Damien. The future looks dire for the trio as gas starts to fill the space. Laurel’s shrieking Canary cry comes to the rescue (with a Green Arrow-disguised Malcolm in tow), shattering the glass container. Much to their own surprise, I think, Malcolm and Oliver end up saving each other’s lives. The building, along with Damien, is blown up, but he survives the explosion (he’s like a cockroach, that one). Even worse, Phase 4 of his plan is ready to begin now that the air (in what appears to be an underground bunker) is breathable. His superiors(?), however, worry that Oliver will get in the way of Genesis.

How to solve that problem? By shooting at newly engaged Oliver and Felicity as they share a happy moment in a limo. Ollie manages to maneuver the vehicle away from the ghosts, but it’s too little too late. A bullet-ridden Felicity lies bleeding in his arms.

* Earlier in the hour, Donna discovers Oliver’s engagement ring in a box of holiday decorations – that boy must have sucked at hide-and-seek – and shrieks so loudly, she startles Felicity. After realizing that Oliver planned to propose three months ago, Felicity starts to worry why he has yet to pop the question. “Everything changed,” he confesses when she confronts him. “I just needed some time to rethink things. Because what we’re doing is dangerous.” But as far as Felicity’s concerned, that’s what marriage is – powering through the hard times together. She tells him she would have said yes – and she gets the chance to at the end of the episode when Oliver proposes during a Christmas tree lighting. “She is the one who lights my way,” he coos. “Felicity Smoak, would you make me the happiest man on the face of the Earth?” It’s sweet, but I couldn’t quite enjoy it knowing that Oliver made such a monumental step in their relationship, fully aware that he was keeping a huge secret from Felicity.

* Damien goes home to his family for Christmas?!

* Dig’s brother? Still in that cage. And no more willing to help out than before. 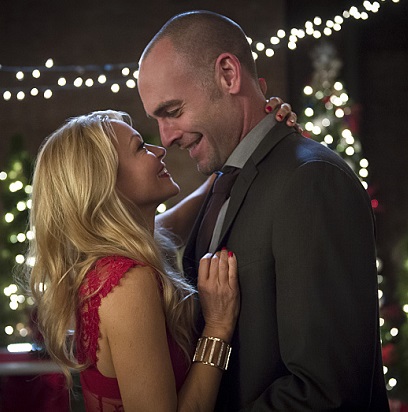 * In flashback land, Oliver uses Taiana for diving lessons so he can get to the ship and retrieve a map to uncover what Reiter wants. Conklin catches up to them just as Oliver comes back up for air with the paper.

* Anyone else surprised to learn that Laurel didn’t know Lance was working for Damien and then Oliver as their inside man? Hopefully, this doesn’t mean Oliver and Laurel’s secret-keeping issues are going to resurface.

Arrow fans, what did you think of the fall finale? Grade it via the poll below, then hit the comments to back up your pick!